Andrew Conway on achieving his ambitions and getting greedy 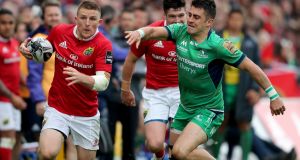 Sometimes your life parachutes you into a state of mind that you really can’t avoid. You are surrounded by certain people and firm ideas take hold. Then you just can’t shake them off.

Andrew Conway’s preoccupation with the game was that he was obsessed with playing for Ireland. Then, this year against England in one of the biggest Six Nations Championship deciders in years, he did just that.

“If I was outside looking in at someone in that situation, I’d be like ‘Woah, best of luck to him – hopefully it goes well . . . that’s getting in at the deep-end’,” he says.

“I actually thought I would feel different after. Because I had built it up as this monster in my head for so long, that I need to get capped and I need to play for Ireland, I can’t retire (without one). You build these things up in your head.”

A notion of promise picked out as a teenager surrounded Conway’s career in Blackrock, Leinster, underage Ireland teams, Emerging Ireland and Wolfhounds.

It wasn’t difficult, just the way it was, everybody saying the same thing about a steep career curve that stopped just short of real fulfilment. It has been a long worthwhile wait.

“I’d say so,” he says. “I did have that growing up. That was the perception of where my career was going and it didn’t go that way and lads that I was competing with it did.

“So, yeah, it definitely made it a bit more complicated in my head asking the questions as to why am I not doing this?”

On Tuesday the feeling so kind to him as a boy took forward momentum, and the goodness further blossomed with his name added to the Irish team to tour USA and Japan next month. He goes as a capped player, an important distinction but his career can look forward without any personal historical anxiety.

“Relief is one of the emotions amid other ones,” he says of his international club membership. “It had probably been something that I’d thought about a lot and anything you think about a lot and that’s your goal . . . once you’ve achieved that it’s satisfying, relieving and whatever else.”

It will be Conway’s first Irish tour and gives him the luxury of holding a longer term view of this season. With Ospreys arriving for their Pro12 semi-final in Thomond Park and all that goes with home advantage and hopes of a final, the contrast in seasons for the former Leinster player have been stark.

Munster were in a Pro12 final a few years back (2014-15 losing to Glasgow 13-31) he says, but then fell away from the top table. That falling backwards was more than a perception. Leinster were playing well, Ulster had exciting new backs and Connacht were ripping it up last year.

“Look at this year,” he says. “There’s probably six or seven guys from Munster who got capped and if you look back at last year I don’t know the number. I’d say there’s a big difference in it. When Munster are going well it makes a massive difference.”

For now, it’s about not thinking of Joe Schmidt. It’s about the banal aspects of the game, which is never about next week but the next hour, the very next thing.

Conway will say that Munster’s fate and his are closely aligned, that there is no glory in his selection for Japan and the possibility of more Irish caps if Munster lose to Ospreys to become the first team to lose a Pro12 home semi-final.

“I would have bitten your hand off to have the season we’ve just had with Munster, thus far, and to get an Ireland cap,” he says. “But once you get there, you get greedy and you look for something else . . . If you’re not ambitious then you’re going to be up to nothing really.”