Likes of Hurricanes and Highlanders are dominating the Super Rugby Championship 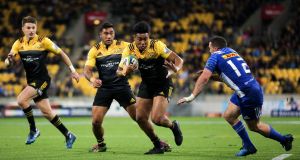 Julian Savea of the Hurricanes makes a break on his way to scoring a try during the Super Rugby match against the Stormers. Photograph:Hagen Hopkins/Getty Images

One series victory in New Zealand, the 1971 tour, underlines historically how difficult it has been for the Lions during 11 visits to the southern hemisphere to take on the All Blacks.

They depart on their 12th tour at the end of the month and will play the first game of a 10-match fixture schedule against the New Zealand County Barbarians in Whangarei on Saturday, June 3rd. The current Lions squad under the coaching baton of Warren Gatland won’t be overburdened by expectation with the All Blacks odds-on favourites to sweep the Test series.

And with good reason. Quite apart from the three Tests against the All Blacks, the Lions will play against the NZ County Barbarians, the Maori All Blacks and the five in-form Super rugby franchises, the Blues, Chiefs, Crusaders, Highlanders and Hurricanes.

The New Zealand Rugby Union has granted permission, after consultation with All Blacks coach Steve Hansen, for the franchises to have access to their international players when opposing the Lions in a throwback to the pre-professional days.

What won’t have escaped Gatland’s attention is the staggering form of the New Zealand rugby franchises. Going into this weekend’s Round 12 matches in the Super Rugby championship, the Blues, Chiefs, Crusaders, Highlanders and Hurricanes have played 32 matches collectively against clubs from Australia, South Africa, Argentina and Japan.

They’ve won a staggering 31. The only time a New Zealand side was beaten in this season’s Super Rugby Championship by a team outside the country came in the Round Six match when the Chiefs lost 34-26 to the Stormers in the Newlands stadium in Cape Town, the latter by some distance the best South African side in the tournament.

In winning those 31 matches, the New Zealand clubs have prevailed by more than seven points 24 times. Only seven clubs – the Sunwolves, Bulls, Cheetahs, Reds and a chapeau tip to the Brumbies who managed the feat on three occasions – have managed to stay within losing bonus-point range.

Furthermore in 18 of those games the non-New Zealand teams failed to hit the 20-point mark but only two, the Sunwolves and the Rebels didn’t reach double figures.

At the other end of the scale, the Hurricanes, have blown away most of their opposition running up 83 points and a 66 point winning margin against the Sunwolves and beat the Rebels from Melbourne 71-6. Even the aforementioned Brumbies (lost 17-13 to Crusaders, 18-13 to Highlanders and 18-12 to Blues) were thumped 56-21 by Beauden Barrett and his mates.

Last weekend the Cheetahs must have thought they were set to join the Stormers in beating a New Zealand franchise when leading 41-24 against the Highlanders in Bloemfontein with four minutes and 30 seconds remaining in the match.

However the Highlanders, Super Rugby champions two years ago, provided a barnstorming finish scoring converted tries through Tevita Li, Matt Faddes and a second by Waisake Naholo to complete a remarkable comeback and win 45-41.

The last time the Lions toured New Zealand in 2005, the matches outside the Test series and the Maori game, were largely played against the NPC rather than Super Rugby versions of teams, the visitors winning all seven.

In 1993, the Lions fared a great deal worse, albeit up against the full-fat version of the provincial sides, losing to Otago (Highlanders), Hawke’s Bay, Auckland (Blues) and Waikato (Chiefs), the latter who had won the New Zealand rugby championship the previous season.

The last try scorer for Waikato in a 38-10 thumping of the tourists was the current Lions coach Warren Gatland, loitering on the wing to cross unopposed. So he above all understands the magnitude of the task that the 2017 Lions squad faces.