Stander: Collecting Lions goodies ‘one of best days I’ve had’ 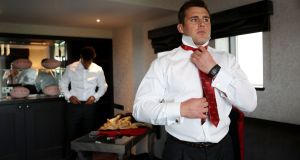 CJ Stander during the Lions’ suit fitting at the Hilton Syon Park Hotel, London. Each player is reportedly receiving €82,000 for the eight-week tour with a further €12,000 if they win the Series. Photograph: David Davies/PA Wire

This week has not stopped. It has been a swirl of action and new experiences for CJ Stander. On Monday, he travelled over to the Vale of Glamorgan resort for the Lions’ first assembly, meeting the best of the rest, trying on a mountain range of gear.

Stander tells it like a five-year-old describing his first steps into the sitting room on Christmas morning. The red shirts, the crest on the blazers, the tracksuits, the cufflinks . . .

His history of the Lions is different to our own. They were always the opposition. As a boy growing up in South Africa, the Lions were the team that came down from the north every decade or so to raid places close to South African hearts, Rustenburg, Bloemfontein, Pretoria.

Steeped in history and arriving with names from the past like “The Invincibles” or “Untouchables” and Jim Telfer’s famous 1997 saying ringing in their ears. “To win as a Lion this is your Everest,” Telfer told his players.

This week the new Lions’ world that opened up for Stander has had to dovetail with the preparation for Ospreys’ arrival. It has been a week that has enriched him in different ways almost beyond his thinking.

“One day when hopefully I have a daughter or son they can wear it out somewhere or I can just keep it in my closet.

“Look, for me, I remember watching them . . . the first memory was Pretoria 2009. It was like an elite club, at that stage. I thought I’m not getting in there, that’s probably the best of the best in the northern hemisphere, in the world. Just the way they mixed together, that camaraderie, it was the place you wanted to be. It was a great day. It was special.”

A team festooned with Irish players turned out for the 2009 second Test in Loftus Versfeld, Pretoria. Rob Kearney was fullback, Tommy Bowe on the right wing and Brian O’Driscoll lined up at outside centre. Luke Fitzgerald played left wing with openside David Wallace and number 8 Jamie Heaslip in the backrow. Paul O’Connell captained the side and Ronan O’Gara was on the bench.

South Africa with tries from JP Pietersen, Bryan Habana and Jaque Fourie won the match 28-25 in a win that was to secure the series for the Springboks. It is that which Stander must shake off for the more mundane aspects of Limerick and a Pro12 semi-final.

“It’s in the back of the head now. I think a lot of boys are concentrating on playing semis and finals. I want to concentrate on Munster, now because I’ve never been there and hopefully move on to the final.”

Stander had travelled to New Zealand with Super Rugby when he played with the Blue Bulls for two years before joining Munster in 2012, his quality evident from South African Under-18 and 20 squads before that.

But a Pro12 semi-final brings its own pressure to a hungry Munster team. The Lions can wait, will wait.

“We haven’t spoken about it as a group. We know we need to get through the semi and into the final but there are players that want it and haven’t had it before,” he says.

“And there are other guys who realise they have another few years left so this is a great opportunity to get something.”

That is how the week has been so far, opportunity, accepting new things.