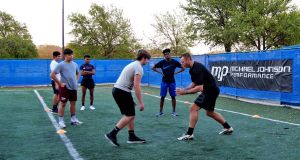 Former Ulster and Ireland player Roger Wilson has called Texas home for the last two years and has settled into life easily with his wife and two young children.

The chilly Friday nights at Ravenhill that he knew as Ulster’s second most capped player have been permanently swapped for balmy Friday Night Lights high school football as a defensive coach. Wilson has regularly sat in his local high school stadium in Dallas that holds 18,000 crazed fans, with 10,000 of them being annual paid-up season ticket holders. In Texas, they say everything is bigger, and that is certainly the case for high school football.

“In my last year playing for Ulster, I always knew that we were going to move to the States as my wife has citizenship here,” explains Wilson. “We settled in Dallas, Texas, and when we arrived, I had no job or network, which was a fairly scary prospect.

“I initially got a job as a strength and conditioning coach with the Michael Johnson Performance Center, and through my work there, I was able to meet NFL players and talk to them about the tackle in rugby. They thought we were crazy for playing rugby with no pads, but there was definitely great respect there.

“I’d then watch the young kids playing high school football leading with their heads in the tackle and was shocked by what I was seeing. After talking to a lot of parents who wanted a better and safer technique, I thought surely there’s something I can do, and that led to the work I am doing now.”

After 15 years as a professional rugby player with Ulster and Northampton, with a single cap for Ireland in 2005, Wilson set up a business ‘Tackle Smart’ to teach high school American Football players how to use rugby tackling technique.

The topic of concussion remains a hot one in American Football, accelerated in part by brain injuries experienced by former NFL players. Friday Night Light football is a rite of passage in the Lone Star State, but the high school game is suffering nationally in participation numbers. Last year, the New York Times reported a decline of 10 per cent in high school football participation over the last decade. Wilson didn’t grow up a fan of American Football but became immersed in it living in Texas and often couldn’t believe what he saw at high school games.

“In rugby, you are lucky in that everything is in front of you, whereas in football, the hit can and does happen from anywhere,” says Wilson. “I played 15 years of rugby, but some of the blindside hits you see with kids leading with their helmets make you cringe. Apart from the serious safety aspect with the helmet hit, you’d also see so many missed tackles which could be easily rectified with some basic rugby coaching. I knew that I could make a difference and was motivated to do something with my experience as a player.”

Wilson can name one moderate concussion he experienced in 15 years as a professional rugby player. Tackling safely was first honed as a six-year-old on the cold and muddy pitch at Instonians Rugby Club in Belfast. Wilson would spend monotonous hours on his knees learning how to place his head safely in the tackle and using his shoulder to drive the player down.

The basic defensive principles he learned in mini rugby were eventually transferred to professional rugby. In high school football, children are still being taught to lead with their helmet in the tackle to create the hardest impact possible, regardless of potential injury. Wilson is a now a parent of two young children and understands the rising fear for parents he speaks to in Dallas who are concerned about their children suiting up in high school football.

“The parents are very straightforward to deal with and by and large, they really see the value in what I am teaching their children to make the game safer. I’d say there are probably two types of parents you get, there are the pushy ones, who maybe played football in the 70s or 80s and think they know everything.

“They push their kids as there’s huge money to be made for the select few that might make it. Then there are ones who are all about the safety, they’re not sure about concussions and safety of high school football anymore, and they are happy that I can help make the game a bit safer for their children. The parents are fine to deal with, it is the coaches that present the bigger challenge.”

Texas high school football is a multi-million dollar industry. Across the state, young teenagers run out in front of packed stadiums, with jumbotrons and television cameras following their every move. Every season, regular high school students captivate an entire community. Huge money is invested in high school football programmes that can become the beating heart of Texan society.

Wilson’s experience of playing for RBAI as a standout in the Ulster Schools’ Cup under Brian McLaughlin couldn’t be more different to Texan Friday night football. A high school football coach is expected to deliver results quickly or risk losing their livelihood, which leads to a reluctance to bring in a rugby style of tackling that they are worried could dilute their defensive effectiveness.

Wilson has slowly built up a loyal clientele of young students in Dallas who have quickly adopted the rugby tackling technique as part of their defensive armoury. He has also started to diversify his business into other sports such as ice hockey, for young players learning how to body check for the first time. While the feedback from the teenagers and their parents has been excellent, Wilson knows that for his business to thrive and ultimately succeed, he is ultimately reliant on the buy-in from the high school football coaching staff.

“Kids are pretty responsive to the technique that you teach them, but honestly, it depends on what their high school coach is telling them. When I coach a group of kids, you can coach them in this rugby technique only if their high school is on the same wavelength as me.

“If a kid uses my rugby technique and the coach doesn’t agree, the kid just won’t do it. We are making progress, and some kids and coaches are starting to adopt the rugby tackle, particularly at a younger age group where the pressure isn’t as bad.”

In public, many Texan high school football coaches will advocate safety as a priority for young players, but in private, the majority can be reluctant to change tried and tested defensive techniques that use the helmet as a weapon. Wilson is passionate about creating a safer tackle in high school football but knows he must emphasise the benefits of a rugby tackle in defensive plays to ultimately earn the coaches’ trust.

“American Football and rugby have similarities, but of course, I understand that there are major differences. In rugby, although a coach won’t admit this, if you give away an inch or two, it’s okay as long as you bring your opponent down. In American Football, this just isn’t an option.

“Where I think the rugby tackle can really help is giving the players leverage, as often they are so upright they get knocked back in contact. Also, because they are often so upright, they can get sidestepped, or ‘duked’ as they call it here. I try to teach them to stay on their toes and stay low so they can react quickly and make the tackle safely and effectively.”

Wilson regularly reads about supposed innovation in American Football equipment, specifically in terms of alleged safety advances on the helmet. He believes that focus on the equipment’s ability is shortcutting the ability to make the game safer. In a game of brutal physical impact, the helmet can make a player feel invincible when it is doing lasting and untold damage to their brain. In 2017, Dr Ann McKee, a neuropathologist conducted a study of 202 deceased American footballer players, 110 who had played in the NFL, and 110 were found to have chronic traumatic encephalopathy or CTE.

“There’s always talk about making the game safer in terms of equipment here, you can read about it most days,” says Wilson. “Ultimately, I think any so-called advances in equipment have the opposite effect on safety. If a player thinks the helmet will save them, they’ll be completely reckless and not worry about their tackle technique. A better helmet will not stop concussion. Helmets will stop cuts, bruises, stitches and fractures, but they won’t stop concussion.

“It’s a hot topic here, particularly with CTE. The accumulation of these helmet hits can lead to degeneration of tissue in the brain, which leads to dementia, depression and we’ve seen suicides from former NFL players. There’s a lot of research and a lot of uncertainty on what these hits are actually doing. You can only tell if they have CTE after they’ve died, so you do think what the accumulation of these hits is doing a young person playing the game.”

The Seattle Seahawks are a notable example of an NFL team who have fully embraced rugby tackling as part of their defensive system and Wilson is hopeful that Texan high school programmes can similarly embrace defensive lessons from rugby. Progress is slow, but it is happening. Far from home, Wilson hopes that the Friday Night Lights in Texas will eventually illuminate a new safer defensive philosophy for high school football players.