Assessing the law changes in Super Rugby, Grill puts it up to Laporte and more 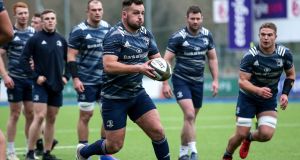 There is a standing joke in Irish rugby that one of the most eagerly awaited news items in a season is the confirmation of Leinster’s first year academy intake, especially amongst the other provinces.

That announcement will come early this week and in Limerick, Cork, Galway and Belfast there’ll be more than a casual interest, both in the players nominated and several that don’t make it for a variety of reasons but one of which won’t be a lack of talent.

Population size and player numbers are significant contributory factors but the Leinster academy and its staff also deserve huge credit in terms of talent identification and development. It bears favourable comparison with any in the world whatever the metrics, down to the bottom line of producing exceptional rugby players for province and country.

Not every academy player trains on, some are stymied by a logjam of talent within that provincial system in particular positions and inevitably for others, there comes a time when the faraway hills appear greener, especially for the ambitious.

Take tighthead prop for example; Roman Salonoa headed for Munster, Jack Aungier for Connacht, no doubt conscious that in Tadhg Furlong, Andrew Porter, Vakh Abdaladze, Thomas Clarkson and Michael Milne, who like Porter can play both sides of the scrum, there is exceptional competition within the Leinster squad for match minutes.

The IRFU’s performance director David Nucifora has been consistent in expressing the importance of young talent being given an opportunity to regularly play at the highest level possible to expedite their development irrespective of where they were born; the essence of his argument that the national team interests occasionally supersede provincial considerations.

Leinster understandably feel aggrieved that they have nurtured and developed players only for others to reap the benefits. Ultimately though it is a central tenet in professional sport to covet and try and recruit the best players. Given their pre-eminent production line, it’s an obvious place to start shopping for the other provinces and not just at academy level.

For those who enter the Leinster academy system this week, the challenge is only starting and where they will be in three year’s time is appreciably undefined.

Refereeing law changes will be the key factor

Watching the Super Rugby Aotearoa match between the Crusaders and the Blues and specifically the breakdown it was instructive to note how referee Paul Williams interpreted this aspect of the game. There are a plethora of trial laws being implemented in the competition but one area which World Rugby has been keen to de-clutter is the breakdown.

Players have been instructed that the tackler must roll away in an east-west direction, or towards the touchline, and that referees will be very strict in penalising players who clearout or come in from the side at rucks and also that the defending team must be “clearly” onside at the breakdown.

Television camera angles can be deceptive but the “clearly onside” instruction appeared to be less rigorously policed. Both teams shaved the margins to a point where more players appeared offside than onside, especially outside the five metre channels around rucks.

It’s impossible for a referee to see every encroachment, so there is still fine tuning required in terms of the interaction of the three match officials. World Rugby is keen to give the attacking team a little room to breathe in trying to ensure a better spectacle but no matter how many law alterations are proposed or adopted, the way they are interpreted and officiated is the ultimate arbiter of any successful change.

“We need to get the right person and sometimes it is hard to find the right person. In fairness, Leinster do a great job to start with, but also the schools and clubs. We have a lot of young players coming through who I think can develop and take those places. I wouldn’t be too worried. Sometimes the solution isn’t out there; it’s inside.” - Leinster backs’ coach Felipe Contepomi on whether the province would consider filling the ‘Non Irish Qualified (NIQ) contracts now available to them.

Grill puts it up to Laporte

Florian Grill recently took his challenge to the incumbent FFR President Bernard Laporte – the election result will be announced on October 3rd – up a notch verbally by suggesting that his rival’s role as vice Chairman of World Rugby had superseded a primacy of interest for the French club game.

Grill, who according to media reports is supported by Serge Blanco, Fabien Pelous and Jean-Claude Skrela, said: “I consider Laporte’s project as out of touch, which sees rugby as a spectacle, and globalised, with an annual club World Cup.

“Everything revolves around money which is meant to drip down to the clubs. In our project, we want to give it some sense. We’ll start from the base. They are completely out of touch and disconnected but also, for me, dehumanised because everything turns around money. Bernard Laporte is on another planet. His planet now is World Rugby; it’s no longer the FFR. Two projects are going against each other.”

Grill suggested that he and Laporte should publicly debate the issues but the latter declined. The man who engineered France’s successful bid for the 2023 Rugby World Cup said: “Me, my debate is on October 3rd in the polls.

“What we have done for this Federation is that we have given the floor back to the clubs. It is prohibited today to carry powers of attorney. I limited the number of terms to two. So in terms of democracy, if there is one who has done something in the world of rugby, it is me.”

Niall Quinn and Brian Kerr differ on role of outsiders in FAI 06:00
New team, fresh start, has Dan Martin shooting for the stages 06:00
Sporting Cathedrals: Cheltenham reveals all about the wonder of racing 06:00
Fathers, sons and soccer: Reflections on the family business 06:00
Different Strokes: Bryson DeChambeau’s rules debates doing him no favours 06:00
Crossword Get access to over 6,000 interactive crosswords