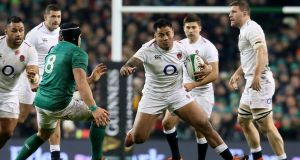 Manu Tuilagi: In the week that 139 job losses have been signalled at Twickenham, there is no longer any mileage in pretending that English rugby – or Leicester – has the available spare cash to guarantee the status quo. Photograph: Paul Faith/Getty Images

As he sat overlooking the Mediterranean, sipping a cafe au lait, Manu Tuilagi smiled wryly to himself.

No need to jump into any harbours these days, he thought, pondering his lucrative move to the south of France after falling out with Leicester and enjoying a profitable stint in Japan. Didn’t moving to warmer climes do wonders for Jonny Wilkinson’s body back in the day? Perhaps he should have headed across the Channel years ago.

Fact or fiction? The latter, for now, but you can see how the idea might one day appeal to the England centre. It would potentially prolong his career, give him a fresh lease of life and allow him and his young family to enjoy another culture.

Not only that but he would be guaranteed to enjoy one of the biggest farewell gifts in Premiership history. Every single diminutive back in the league would instantly contribute a week’s wages if it meant Manu, finally, was someone else’s problem.

The only drawback, of course, is the rule decreeing that players must be home-based if they wish to keep representing their national team.

Which begs the question: for how much longer can the ‘home-based’ clause withstand the increasingly gale-force winds of change? Take one reduced salary cap, mix with a global pandemic and English clubs scrambling to slash their stars’ wages and you have the perfect conditions for big names to reassess their options.

Just because Leicester want to offer him less does not mean everyone else will. At 29 and with 43 caps to his name, even Tuilagi has been publicly doubtful about whether he will feature at the 2023 Rugby World Cup. How ironic if he were to be pocketing a top-dollar salary in France and unavailable to England when that tournament takes place.

Ask Jones if he would still pick a beret-wearing Tuilagi and the answer would be a surefire “100%, mate”. But what about all those other English centres whose noses would be put out of joint, their ‘loyalty’ trampled upon? One suspects that, gazing at their own shrinking pay packets, they would be rather more inclined to congratulate Tuilagi for doing exactly what they would have done had they, too, received a comparable offer.

They would also be justified in pointing to the changing realities of their sport. According to the FFR’s president, Bernard Laporte, the deal to allow the private equity firm CVC to transform the Six Nations commercially is effectively done. That means CVC now owns a stake – or will do – in two of the three top leagues in Europe as well as the world’s most famous annual tournament.

Its executives will not wish to see one of the world’s most marketable players trapped behind the metaphorical barbed wire of a stuffy regulation designed to prop up a domestic league in which they also have a financial stake. They want Tuilagi to be playing high-profile games for both club and country, period.

With All Blacks and Springboks now routinely taking mid-career sabbaticals in Japan, the tea leaves are already available to be read if the RFU is so minded.

In the week that 139 job losses have been signalled at Twickenham, there is no longer any mileage in pretending that English rugby – or Leicester – has the available spare cash to guarantee the status quo.

If there was, say, a potential exemption available for those who have spent a decade or more in the Premiership, few could dispute that someone like Tuilagi has earned his freedom pass.

Unless, of course, CVC wishes to centrally contract all the world’s best players, which would involve investing astronomic sums without any guaranteed return. It is cheaper, and easier, to buy into the competitions they play in and deliver a fixture schedule that maximises the marketing value of Tuilagi rather than dilutes it.

So if Manu, Finn Russell, Stuart Hogg and a handful of others want to go and play rugby in a European country other than their own, is that really the end of the world?

And by the time England resume playing in front of a grateful Twickenham crowd, will anyone remotely care if Tuilagi has forsaken (for reasons not of his own making) the east Midlands and is resident somewhere warmer?

There will certainly be many in Samoa who will react with derision if the RFU, having claimed Tuilagi when it suited it, was to rule him ineligible because he has crossed a far narrower stretch of water. If the English don’t want him what is the moral argument against him bolstering Samoa’s squad at the 2023 World Cup instead? Stranger than fiction, maybe, but we live in unusual times.