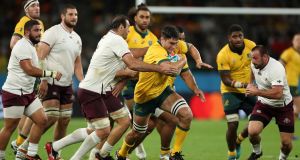 World Rugby is hoping to provide some clarity this week on a Test match fixture list for the remainder of the year, including dates and kick-off times for the outstanding 2020 Six Nations Championship matches and potentially an eight-team tournament that would involve Ireland, England Scotland, Wales, France, Italy, Fiji and Georgia and culminate in a final on December 5th.

Rugby’s global governing body rescheduled a meeting originally pencilled in for the end of last month in the hope that the additional timeframe would assist in brokering an agreement in relation to Test rugby for the remainder of the calendar year.

Andy Farrell’s Ireland are expected to play Italy at the Aviva Stadium on Saturday, October 24th and France in Paris on October 31st, coronavirus permitting. Ireland were due to host Australia, South Africa and Japan over successive weekends, starting on November 7th with a clash against Dave Rennie’s Wallabies.

However, given the Covid-19 pandemic there is little prospect of any southern hemisphere teams travelling north, so instead in a bid to boost revenue for the beleaguered unions, there is a proposal currently being thrashed out to run an eight-team tournament; two pools of four teams, each country plays three matches, with those who finish top of the respective groups meeting in a final on December 5th.

There has been plenty of media speculation, especially in England, as to the identity of the two countries who will supplement the Six Nations’ constituents. The 2019 Rugby World Cup (RWC) tournament hosts Japan, and Fiji, have been regularly mentioned but it makes more sense that due to coronavirus and travel restrictions for Georgia to be chosen ahead of the Japan.

The majority of the Fijian and Georgian squads play professional rugby in France and Britain which would facilitate the two countries playing in the tournament, minimising travel and the attendant restrictions. The inclusion of a brace of Tier 2 nations would also be a positive step down a road with some way still to travel.

Georgia won all five games in winning the 2019 Rugby Europe Championship, including victories in Romania and Russia. Indeed they have won nine of the last 10 tournaments in that regard and there has been a growing clamour for them to be added to the premier European tournament, the Six Nations or at least be afforded a two-leg relegation-promotion playoff.

While that doesn’t appear likely in the short term, an opportunity to test their mettle against the Six Nations teams would be a decent platform to press claims for future inclusion. If Georgia wants to make a statement about where they are rugby-wise in global terms, this would be the ideal time.

The Georgians won one pool match, against Uruguay at the RWC in Japan, while managing a very creditable 27-8 defeat to Australia. The majority of their squad play rugby in France and it would be reasonably straightforward for them to base themselves there while playing the three matches.

The Daily Telegraph has suggested that Wales are set to play a number of matches, including their re-fixed Six Nations game against Scotland, in London, three at Twickenham and one at West Ham’s London Stadium.

Wales have home advantage in the game against the Scots and the suggestion is that match will be played at the London Stadium, while the Welsh would look to play their other ‘home’ games in the eight-team tournament at Twickenham. The Principality Stadium in Cardiff is currently a field hospital and is expected to maintain that status for the foreseeable future.

An attendance of 40,000 supporters even with current social distancing regulations in England is apparently possible according to sources in Wales and the Welsh Rugby Union are “in advanced negotiations” with their English counterparts.

There is no doubt that it would be mutually beneficial as the English RFU will benefit from a rental agreement on their facility and will help as they bid to recoup some revenue on what is forecasted to be a £107 million loss due to the Covid-19 pandemic.

Meanwhile, Manu Tuilagi has completed his switch from Leicester Tigers to English Premiership rivals Sale Sharks. The 29-year-old agreed terms on a contract that runs until the end of the 2020/2021 campaign.

The 43-times capped England centre was a free agent after rejecting a 25 per cent pay cut and leaving the Tigers, the club he joined as a teenager. Tuilagi will now be available for Sale’s push towards the playoffs when the current Premiership season resumes next month.

Sale’s director of rugby Steve Diamond said: “We contacted Manu’s agent and Leicester Tigers last week to discuss the player’s current position. After discussions on Friday, all parties – Leicester Tigers, Manu Tuilagi and Sale Sharks – agreed that the player was a free agent and was able to enter into negotiations with another club.

“Manu will be a fantastic commercial and playing addition to our squad and I am looking forward to seeing him join up with the lads at Carrington this week.”

Madigan has Ireland caps in sight; view from Melbourne’s second lockdown 07:06
View from Melbourne: Sporting fabric of the city suffering from second lockdown 06:30
Madigan’s primary goal is Ireland caps after switch to Ulster 06:00
Seán Moran: It won’t take much before cancelling All-Ireland looks like a solution 06:00
My sporting disappointment: Battered, bloodied, broken by The Wall 06:00
Crossword Get access to over 6,000 interactive crosswords