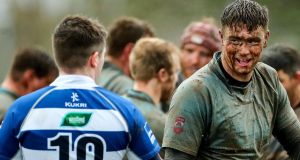 Galwegians’ Michael O’Donnell after the Energia All-Ireland League Division 2B game against Dungannon at Crowley Park back in February. Photograph: James Crombie/Inpho

Clubs, particularly those in Division 1A and 1B of the All-Ireland League, will have a significant and practical role this season in providing a competitive outlet for not only young academy players but also in providing valuable game time for some senior contracted players in provincial squads, particularly if there are international fixtures in October and November .

A workable fixture schedule is of paramount importance, and to this end the IRFU and the clubs have enjoyed robust and healthy dialogue it seems to try and determine a pathway as rugby emerges from the lockdown with a return to the club match environment scheduled for September.

There will be further discussion this week predicated on a common goal of establishing a framework for the return of competitive club rugby. The absence of the Celtic Cup – a tournament that drew provincial A teams from Ireland and clubs in the Principality Championship in Wales – from the calendar due to the Coronavirus pandemic, accentuates the importance of the role that clubs will play in the upcoming season.

The Celtic Cup and its previous incarnation, the British & Irish Cup, polarised opinion; the clubs weren’t enamoured because they were periodically pillaged for players but the provinces viewed those tournaments as a handy pathway in developmental terms, particularly of academy players.

Whatever side of the debate that’s taken there is no arguing with the fact that quite a number of the frontline players in provincial squads and indeed several in Andy Farrell’s Ireland squad benefitted from playing in those tournaments.

While the union will try to fill in some capacity to fill the void left by the Celtic Cup, probably with an extended A interprovincial championship, it won’t suffice in isolation as there aren’t enough match minutes to go round and keep all players sharp. Enter the clubs.

The IRFU produced a roadmap, a five-stage process with strict governance on the protocols to be observed, offering a potential start date of September, provided there were no pandemic spikes and setbacks. There was no detail about what the competitive club rugby landscape might look like. That’s what’s been thrashed out at the moment.

One potential route is for clubs to play within their provinces initially, in a league, and or, cup format, a sort of soft opening that minimises travel. It would allow them to road test in a practical way the procedures necessary to protect players, officials and spectators.

There might be a divergence divisionally when it comes to reintroducing an All-Ireland League format. One option that’s been mooted is that Division 1A and 1B would be retained while clubs in Divisions 2A, B and C would continue to play within provincial boundaries for the upcoming season. There are other proposals including retaining the existing format.

In the context of an All-Ireland League, different health and safety regulations regarding Covid-19 in terms of Government policy in the Republic of Ireland and Northern Ireland would need to be teased out as to what is best practice; it’s not insurmountable and should be a relatively minor hurdle to overcome.

The IRFU, the provinces and the clubs have ‘skin in the game’ in their respective desires to restore club rugby in a meaningful manner. The Union and provinces need a competitive match environment to keep players ticking over, irrespective of whether they are from academies or senior provincial squad players.

Noel McNamara’s Ireland Under-20 side won a Grand Slam in 2019 and were unbeaten through three matches in the present campaign. The majority of those squads got a large tranche of their match minutes at club level. It hugely facilitated their development.

Jack Crowley spoke about how important it was for him to play regularly for Cork Constitution in the All Ireland League ahead of his impressive performances in the 10 jersey for McNamara’s team. Dublin University tighthead prop Tom Clarkson is another example, so too Clontarf’s Brian Deeny, Shannon’s Thomas Ahern, while hooker Dan Sheehan might not have earned a senior contract with Leinster but for his consistent excellence, first for Trinity and latterly Lansdowne.

Irish rugby needs a vibrant club game to continue to produce quality in depth with an eye to replenishing the demands of provincial and national interests and their playing requirements, arguably never more so than now given travel restrictions and other issues thrown up by the pandemic.

The clubs’ interest is not altogether altruistic as there is a practical dimension that involves filthy lucre. They need to generate revenue in whatever capacity, sponsorship – Energia have been more proactive in that respect in terms of the AIL – pre-match functions, bar, even modest gate receipts are better than nothing. Friendly matches are useless in that capacity so it’s important that whatever format is agreed when it comes to the club game allows it to breathe a little financially.

The Union threw the clubs a few quid, literally, a hardship fund of €500,000 in total to accommodate all requests but even the four-month moratorium on all club loan repayments to the IRFU is due to end on August 1st.

There are playing and financial issues to be resolved across all levels of the game and in that respect the clubs are important constituents in helping to shape what Irish rugby might look like after the pandemic.