Rob Kearney: ‘I did want to go on playing next season and I still do’ 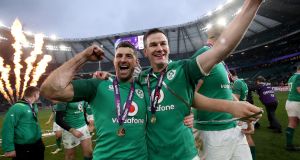 Rob Kearney and Jonathan Sexton celebrate winning the Grand Slam after the win over England at Twickenham on St Patrick’s Day in 2017. Photograph: Dan Sheridan/Inpho

He’s one of Ireland’s most decorated players of all time. He’s arguably, perhaps even inarguably, Ireland’s greatest fullback ever. Yet, although he could be slipping away almost unnoticed, Rob Kearney is typically sanguine about this current state of affairs.

It’s been eight weeks since Kearney last played a game of rugby, even though he has been fully fit. Ireland’s first-choice fullback up until the World Cup quarter-final last October 19th, he has started only three games for Leinster since then along with five appearances off the bench.

9 Johnny Watterson: I do not buy the apology around paedophile John McClean

11 Gwyneth Paltrow: ‘I’ve never been asked that question before. You’ve made me blush’

15 Q&A: What are the new coronavirus variants and should we be worried?

17 Diarmaid Ferriter: We are being infantilised on Covid-19 by an immature Government

19 Lives Lost to Covid-19: Tommy Cawley, the bull man of Bellmullet and a winning jiver

20 How many masks should you wear while out and about this weekend?

22 Thoroughly modern makeover on tucked away Ranelagh road for €950k

24 Focused Social Democrats could face defining decision at next election

29 No guarantee all children will be back in school by mid-April, Ryan warns

31 Megan Nolan: At 15, I betrayed my boyfriend under the influence of the little alcohol it took

33 Hilary Fannin: Some strangers need a good slap with a mackerel

37 Sausage and egg muffin that’s better than the takeaway? Here’s how to do it at home

38 Ramona and Canice Nicholas to get €400,000 in Cara pharmacies exit deal

39 The Movie Quiz: What was Popeye’s podiatry pointer?

40 More Irish people unhappy than ever before, CSO survey finds