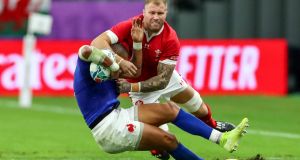 Wales’ Ross Moriarty high ackles Gael Fickou of France. The prospect of less concussions due to safer waist-high tackling and no double hits, leading to more offloads and opportunities for the attacking team, is exciting. Photograph: James Crombie/Inpho

Whenever life returns to something resembling what we once called normal, and sport and rugby also come back into our lives, nothing will clearly ever be quite the same again.

Of course, in its basic sense, rugby will resume as a gladiatorial contest between two teams of 15 players, but all the indications from World Rugby’s trialling of amended or new laws in the French fourth tier in the first half of this suspended season suggests it could be a radically different sport by the time the 2023 World Cup comes around.

In March last year, World Rugby held a three-day symposium in Marcoussis, France’s training centre south of Paris, to generate ideas aimed at making rugby both safer and a better spectacle, and came up with six law trials.

The most eye-catching and most discussed was the so-called 50-22 kick, a variation on rugby league’s 40-20, which rewarded teams who found touch in the opposition 22 from inside their own half with the ensuing throw-in.

This would oblige defending teams to keep more players in the back field, so creating more opportunities for the attacking team, while also reducing the number of collisions. That was trialled in Australia’s National Rugby Championship (NRC) this year.

But even more revolutionary was lowering the height of a legal tackle from the armpit to the waist, and also prohibiting double tackles.

Roxana Maracineanu, the French minister for sport, addressed the conference and French rugby was reeling from four deaths in rugby union over the previous 12 months. Bernard Laporte, president of the FFR, said the game had to fundamentally change both the mentality of players and the laws, with regard to tackling.

World Rugby’s research shows that the tackle is responsible for 50 per cent of all injuries and 76 per cent of all concussions (of which 72 per cent occur to the tackler). This was partly the consequence of an increase of ball-in-play time by 50 per cent since RWC 1987 to 35 minutes at RWC 2019, and a 252 per cent increase in tackles over the same period.

While The High Tackle Sanction Framework trialled at two Under-20 World Cups and brought into the elite game had helped to lower injury rates (by 15 per cent) and concussion rates (by 30 per cent) at the 2019 World Cup in Japan, the game’s governing body know they need to go further.

Hence, in tandem with lowering the tackle height to the waist, and thus forcing the tackler to bend lower, under the trials the ball carrier had to remain upright rather than dip into tackles. The FFR trialled the tackle amendments in their fourth tier, Federale 2 this season.

It was also decided to award a goal-line drop-out to the defending team when an attacking player who brings the ball into in-goal is held up over the line. This should force attacking teams to be more inventive or run the risk of turning over possession with pick-and-jams or one-off runners ad infinitum, while also rewarding good defending. This was trialled in Australia’s NRC.

Another trial was to allow officials to review a yellow card when a player is in the sin-bin for dangerous foul play and upgrade the offence to a red card if needs be.

There was also the introduction of a penalty limit for teams, upon which a mandatory yellow card is given to the last offending player as a team sanction.

After an initial increase in the number of penalties for high tackles, those figures dipped in December and January.

Following on from the evident increase in offloading as a result of the High Tackle Sanction Framework, the number of offloads out of the tackle in Federale 2 increased from 6.7 per cent in September-October 2018 to 8.7 per cent over the same months in 2019. These numbers jumped further to 11.2 per cent in December and January.

Less kicks also led to less lineouts, down 21 per cent, whereas the number of scrums remained similar.

The additional bonus of safer waist-high tackling and no double hits, leading to more offloads and opportunities for the attacking team, is genuinely exciting

Meanwhile, in Australia’s abbreviated 2020 NRC, there were 14 cases of 50-22 kicks which found touch in the opposition 22 from inside halfway and three of them led to a try as a result of the subsequent attacking throw-in.

While there was less evidence to go on, not surprisingly the trial in rewarding the 50-22 kick actually led to a slight reduction in kicks out of hand, but then in punishing defending teams for keeping 14 in a line, it rewards the attacking team for keeping the ball in hand. There was less data regarding the goal-line drop out.

World Rugby’s response has been to describe the findings as “compelling”. The changes and amendments could be approved for global trials within the next World Cup cycle and be made permanent at least in time for the 2023 Rugby World Cup in France.

It remains to be seen whether some or all of these trials become enshrined laws of the game. Clearly, for example, ball carriers cannot remain upright when diving for the try line.

But first and foremost, the prospect of less concussions overrides everything else. The additional bonus of safer waist-high tackling and no double hits, leading to more offloads and opportunities for the attacking team, is genuinely exciting.

Rugby, it seems, is set to become a radically different sport, and historians will probably look back and say it had to do so.

1 Sideline Cut: Vignette shows why Bird is the true shark in The Last Dance
2 Farrell and O’Connell provide insight into changes in Ireland’s analysis
3 Rodgers says he was ‘really knocked’ by coronavirus
4 Liverpool and Everton to oppose plans to play games at neutral venues
5 Niyi Adeolokun and Tom McCartney among Connacht departures
Real news has value SUBSCRIBE