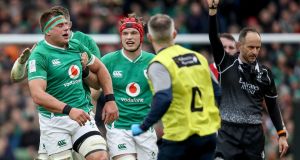 Necessity being the mother of invention, for the first time ever rugby has been forced to adopt its oft-mooted and much debated global calendar albeit, as things stand, if only for this year. But that makes it a better time than ever to bring in law reforms or even guidelines.

So it was that World Rugby issued its “breakdown law application guideline” last week which will come into effect on July 1st, 2020, in other words almost certainly before a rugby ball is kicked again, anywhere.

Previously, new, amended or re-enforced laws were adopted by one of the hemispheres in advance of the other. Now though, with every team in the world in an enforced off-season, everyone has the opportunity to adapt simultaneously.

The guideline was at the recommendation of a specialist breakdown group chaired by the former Scottish flanker John Jeffrey, who sits on World Rugby’s executive committee, and included former Irish head coach Joe Schmidt and new All Blacks head coach Ian Foster, referees Wayne Barnes and Jaco Peyper, as well as players Victor Vito and Josh Beaumont among others such as Dr Éanna Falvey.

The group came to the conclusion that it was necessary for referees to enforce existing laws rather than create new ones. In other words, as Owen Doyle has consistently argued in these pages, the laws existed to prevent the often unseemly mess that is the breakdown and in turn make this area safer, not least for the poachers, who have become an endangered species.

Side entry has largely been ignored unless it is absolutely blatant, despite previous requests from coaches that it be refereed more stringently

Referees deserve some sympathy here, for if they had applied the letter of the law then penalty counts would be tripled or quadrupled. They would then be lambasted not only by Eddie Jones but every coach out there, as well as players and pundits.

Now, following World Rugby’s edict, penalty counts may - depending on how quickly players adjust - rise in the short term to make the game more fluent and safer, but so be it.

For example, the poacher having to ‘survive the clean out’ may have become part of the game’s vernacular but has never actually been in the game’s laws. Yet it has effectively become an unwritten law, meaning that the poacher has to survive three seconds or more of players smashing into them from all angles.

If the ball-carrier or tackled player releases the ball immediately when they go to ground, or is penalised for not doing so, then the poacher will become less of a target. Furthermore, players cleaning out with ‘good shots’ have increasingly been allowed to launch themselves like human missiles rather than be obliged to make a genuine attempt to stay on their feet and beat poachers to the breakdown or wrestle them off the ball.

Compounding all of this, side entry has largely been ignored unless it is absolutely blatant, despite previous requests from coaches that it be refereed more stringently. This has contributed to injuries such as Dan Leavy’s in last year’s Leinster-Ulster Heineken Champions Cup quarter-final.

Henceforth therefore, the plan is for ball-carriers, tacklers, poachers and players cleaning out to be refereed more strictly.

To this end, several existing laws have been highlighted, beginning with Law 14.5. This focuses on the tackler, who must “immediately release the ball and the ball-carrier after both players go to ground and immediately move away from the tackled player and from the ball, or get up”.

Increasingly, tacklers have been permitted to delay rolling away from the tackled player and/or the ball. This has not only slowed down attacking ball, but has sparked ferocious and sometimes dangerous clear-outs.

Law 14.2 stresses that the ball-carrier is brought to ground when “lying, sitting or has at least one knee on the ground or on another player who is on the ground”. In this, World Rugby have also emphasised Law 14.5 whereby tacklers must “allow the tackled player to release or play the ball.”

If the first arriving player is a poacher and they have their hands on the ball and are on their feet, then they may continue to play the ball, despite other players arriving

Henceforth therefore, ball-carriers will need to release or play the ball as soon as even one knee touches the ground, while the tackler must also allow them to do so. This ought to help curtail players fighting for every inch on the ground to better present the ball, while also buying more seconds before teammate(s) arrive. This has contributed to pile-ups as the tacklers writhe, the poachers search for the ball and clean-out players arrive.

Law 15.11 concerns the first arriving player (ie the poacher or the first support player) by stating: “Once a ruck has formed, no player may handle the ball unless they were able to get their hands on the ball before the ruck formed and stay on their feet.” This is in tandem with Law 15.12 whereby “players must endeavour to remain on their feet throughout the ruck.”

In other words, if the first arriving player is a poacher and they have their hands on the ball and are on their feet, then they may continue to play the ball, despite other players arriving. But increasing some of the focus on the ball carrier releasing the ball and making it available will hopefully limit the number of pile-ups and the poacher can win the ball before having to cop the full force of opponents. If they entered legally, are on their feet and on the ball, then the tackled player must release it.

The fourth aspect of World Rugby’s guideline concerns other players hitting the ruck, ie those looking to clear out. 15.5 - “An arriving player must be on their feet and join from behind their offside line.” Law 15.6: “A player may join alongside but not in front of the hindmost player.” Law 15.10 “Possession may be won either by rucking or by pushing the opposing team off the ball.”

Hence, clear-outs cannot be done by players going off their feet, ala human missiles, while also helping to eradicate the curse of side entry at rucks which has become so commonplace it often happens without comment. An example is Sam Cane’s blatant side entry for Aaron Smith’s opening try for the All Blacks against Ireland in the quarter-finals of the World Cup during which, admittedly, there were countless examples.

In addition, Law 15.10, ie “possession may be won either by rucking or by pushing the opposing team off the ball” ought to further encourage and reward counter-rucking.

In all of this, perhaps referees have been admonished, albeit in part by Barnes and Peyper, but in being given a clear nudge they’ve also been empowered to apply the laws.

As a result, whenever rugby does return, it may well look a little different, and hopefully more stringently officiated and safer for players in the longer run.