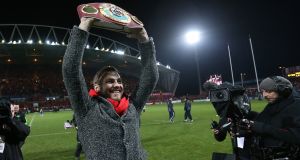 Andy Lee: the former WBO middleweight champion. ‘I asked him how retirement was going but for some reason I was too awkward to tell him how much I loved his book.’ Photograph: Billy Stickland/Inpho

Even when it comes to training we need that competitive edge. I’ve been tipping away on my own but Conor Murray has a Wattbike as well, as does Rory Scannell and Stuart McCloskey, so we’ve been sending each other on our various assessments. It’s not quite the real thing with the lads in Munster’s HPC but it’s the best we can do for the moment.

‘Mur’ has sent me on his pedalling scores, so I’ll chase it to try and beat it, and then I’ll send him on another one. It has upped my training.

A fortnight ago, in anticipation of the lockdown, myself and Liz went out and bought a poker set in Argos. I taught her how to play poker and we’ve played a couple of times since then. She was alright but I won. Then again, I’ve been on a roll.

About eight of us had two poker nights in Japan and I came away with the money both times. On the first night I actually got knocked out straight away but was brought back in and ended up winning. Some of the lads – I won’t mention their names now – were absolutely disgusted. I won it the second time as well.

It’s a good way of having a bit of craic with a bit of money on the line. I only play Texas Hold’em. Wouldn’t have a clue about any other poker game.

It’s funny, when we’re in season, I’m working off a weekly schedule, which enables me to fit in my morning meditation, or some reading while I’m sitting in my Normatec recovery pumps (to help the legs recover post-training).

But that structure and week-to-week focus on performance has gone, and I haven’t been doing either. Being at home, with more time, you’d have thought it would be easier to read books, but that hasn’t happened.

Rory Best’s book arrived in the post yesterday. I’m looking forward to reading that. I’m a big fan of sports autobiographies. If you’ve written a book about yourself you’ve had a career that’s worth writing about and I usually get a load of little nuggets from them, be it Andre Agassi to Mike Tyson to rugby books.

They might confirm what you’re doing is worth pursuing and even drive you on. Say, in this instance, Besty might have done something which he learned over his career that can give you reassurance in doing something similar, or you might pick up a different idea on how to do something.

In mid-season I’d often read high performance-related sports books, which are not easy reads. Sports biographies are easier reads, with stories to tell.

That’s why I loved Agassi’s book – Open. His honesty was so revealing. It goes against rational thinking that someone who was the best in the world at their sport could have hated it so much but stayed with it for so long. I can’t really relate to that, luckily enough.

But he’s not the only sportsperson who’s ever said that and so it’s an honest reflection of his true thoughts. He put himself through some pain and yet it’s hilarious at times too.

When he was younger he was famous for his hair, and then for a long time he wore a wig and he cared more about that staying on during matches, and not revealing that he was actually bald, than the result. Crazy stuff, like his relationship with his father, an Iranian boxer who fought in the Olympics.

Then there was the lifestyle that he led – with one foot in the celebrity world and one in the tennis world – and his run-in with drugs. There was so much that kept you engaged. It’s a big book, a big read, but you don’t want it to end.

I’m a big UFC and boxing fan, and much of what gets them to the top is their mindset, especially as they’re coming up against fighters who weigh the same. Someone like Michael Bisping wasn’t the most talented UFC fighter in the world but he had the mindset of someone who never gave up and ended up winning a UFC title in strange circumstances. But his grit was incredible.

I also read Tyson Fury’s book recently which is very good. Rise and fall, or fall and rise, stories are probably better, and more relevant for mere mortals like the rest of us, than someone like Roger Federer, who was just top of the pile for 20 years and seems like he’s got it all together.

That’s why I also loved Andy Lee’s book, The Fighter. I’ve actually read that twice! He talks about Castleconnell a lot and the Bog Road, which is just up the road from my house.

Liz and I took Sadie, our bulldog, down by the river about six months ago. We crossed the bridge that’s part of our trail and I looked back to see a fella entering the bridge from the other side.

On our second lap he was in the middle of the bridge and as we were walking past he said: “Hey Andrew, how’s it going?”

He’d been in to the Munster changing-room before for a Leinster match. I asked him how retirement was going but for some reason I was too awkward to tell him how much I loved his book.

Then again, if I told him I’d read it twice he probably would have thought I was a freak. But I was properly star struck.

“Oh my God,” I said to Liz. “That’s the man I’ve been reading about for the last few weeks. I know all about his life, and ups and downs, and he’s the one that initiated the conversation. Wow, that’s pretty cool.”