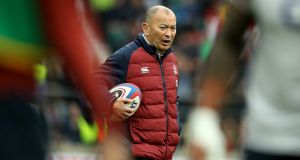 Eddie Jones has agreed a contract extension as England’s head coach through to the next World Cup. Jones’s deal had been due to expire next year but he has now committed through to France 2023 after discussions with the Rugby Football Union chief executive, Bill Sweeney.

Jones’s long-term future had been uncertain since he guided England to their first World Cup final for 12 years last November. In the buildup to the tournament he had regularly hinted that he would leave his role upon its completion but Sweeney acknowledged after the final defeat by South Africa that it “made sense” for Jones to stay until 2023. The following month Sweeney insisted he was in “no rush” to tie Jones down for a further two years but negotiations continued and were concluded a few weeks ago with the announcement delayed by the coronvirus outbreak.

Jones said: “The extension is a great honour for me, but in the current environment, it is only right to acknowledge what a difficult time the world is facing. We are all looking forward to a time when we can get back to playing rugby and use the sport as a force for good in bringing people back together.”

In the aftermath of the World Cup final, Jones had hinted he may not stay on until the next tournament, admitting that it was “hard to kick stones for four years” but insisted he would see out his contract until 2021. His initial deal was up until the 2019 World Cup but it was extended for another two years by the then RFU chief executive, Steve Brown, in January 2018, ensuring Jones would be available for the British & Irish Lions job.

With Warren Gatland committing to another Lions tour, however, Jones has slowly but surely warmed to the idea of staying on as England’s head coach.

Jones added: “I never thought coming here four years ago I would be doing a second four years but the circumstances are right.

“We set out four years ago to be the best team in the world and unfortunately we missed that by 80 minutes. Now we want to be the team that is remembered as being the greatest team the game has ever seen. It’s a big ambition but I believe we are capable of doing it.

Sweeney said: “In exceptionally difficult times, we are pleased to be sharing some good news. We are delighted that Eddie will continue as head coach to run England’s campaign to take us to the 2023 Rugby World Cup. His record since joining speaks for itself and he has proven why he is one of the best coaches in world rugby. The progress shown by England since 2015 has been indisputable and having fielded the youngest-ever team to play in a World Cup final, we know even more growth is possible.

“We reached an understanding soon after returning from Japan but there were some things that we wanted to make sure worked for both sides. We have announced Eddie’s contract extension a few weeks later than planned as our focus was diverted to support the English rugby community during this difficult time.”

Under his tenure England have won the Six Nations title twice – clinching the grand slam in 2016 – and were sitting top of the championship table before the postponements caused by the the coronavirus outbreak. – Guardian