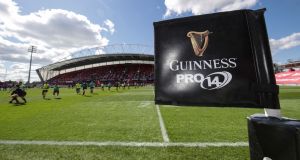 The Pro 14 has deals with nine different broadcasters, including Eir Sport, TG4 and Premier Sport, which is believed to bring in €15-20 million of revenue. Photograph: Billy Stickland/Inpho

The Guinness Pro14 tournament director David Jordan and the board of Celtic Rugby DAC are continuing to devise all manner of contingency plans to provide some kind of climax to the 2019-20 season, without which the five competing countries could potentially suffer a cumulative loss understood to be around €15 million in television revenue.

This is to the backdrop of a warning from the French Federation president Bernard Laporte, who is running for vice-chairman of World Rugby in their elections on May 13th, that the game’s global governing body believes there is a strong risk of rugby not returning to normal until January 2021 – and hence no end to the 2019-20 season anywhere in Europe.

The Pro 14 has deals with nine different broadcasters, including Eir Sport, TG4 and Premier Sport, which is believed to bring in €15-20 million of revenue, and which in turn is split between the IRFU, WRU, SRU, FIR (Italian Rugby Federation) and the South African Rugby Union.

As with their Premiership and French Top 14 counterparts, all manner of scenarios are being considered by the Pro 14 – which has been suspended indefinitely – depending on what window, if any, might conceivably become available.

There is an emphasis on the most valuable matches somehow being saved, such as the concluding 21st round of derbies in the respective conferences, which include the Ulster-Leinster and and Munster-Connacht games. The competition’s most valuable match is the annual Leinster-Munster game in the Aviva stadium, which was due to take place on Saturday week, April 18th, and is worth an estimated €1 million alone to Leinster.

But the Pro 14’s biggest difficulty in comparison to the Premiership and Top 14 (who have come up with worst-case scenarios or playoffs behind closed doors even over one or two weekends at just one venue) is its cross-border make-up.

The Pro 14’s tournament rules do permit the organisers to declare all cancelled games 0-0 draws and award two points to each side. This could leave Leinster, Ulster, Glasgow, Edinburgh, Munster and the Scarlets contesting the playoffs.

However, there is an acceptance, that for the 2019-20 Pro 14 to be salvaged at all, at the very least it would have to be possible for Irish, Welsh and Scottish teams to compete against each other. In other words, not only would the existing restrictions by governments and health authorities amid the Covid-19 pandemic have to be lifted in all three, but travel between the three countries would have to be permissible too.

In the longer term, if no finale to the 2019-20 season is possible and the restrictions in travel remain in place until September and beyond, there must be a real danger of the 2020-21 campaign not featuring the Italian or South African teams.

Or, failing that, the only way of filling the void would be for countries to resort to domestic leagues. This, in the case of Ireland, would mean reviving the Interprovincial Championship, a scenario which has not yet been discussed but could be the only option in a delayed start to the 2020-21 season.

Such a grim outlook, which would cost the participants in the three major leagues losses running into multi-millions, has been brought more sharply into focus by Laporte.

On Tuesday a video conference between the 30 presidents of the Top 14 and Pro D2 clubs and key figures from the LNR and the FFR was held, ostensibly to discuss vexed issues regarding relegation and promotion between Pro D2 and Federale 1.

Early in the meeting, according to Midi Olimpique, Laporte interjected to inform all listening that there was a “risque forte” of the 2019-20 Top 14 and Pro D2 not being resumed.

“I would like to share with you the information that I have from my meetings at World Rugby. One of the recovery hypotheses, the worst, is of a return to normal in January 2021. There is therefore a strong risk that you will not be able to resume competition. Prepare for it.”

This is the second time this week that Laporte has grabbed international attention, after informing Midi Olimpique last Monday of his plans for a world club cup. Similarly, his gloomy prognosis for the 2019-20 season is seen by other key figures within the game as one of many hypothetical possibilities, and one that is too soon so speculate upon. It has also been seen within the prism of Laporte’s election campaign.

Indeed, on foot of this bombshell, the LNR president, Paul Goze, resumed talking and reputedly said: “There is no point in speculating today. The government will decide. Let us give ourselves three more weeks of reflection.”