Rob Howley banned for 18 months after betting on Wales 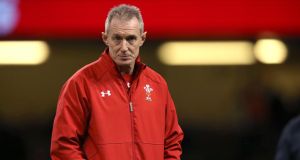 Former Wales assistant coach Rob Howley has been given an 18-month ban from all rugby activities. Photograph: PA

Former Wales assistant coach Rob Howley has been suspended from all involvement in rugby for 18 months, nine of which are suspended, for breaching betting regulations.

The ban is backdated to the time of his initial withdrawal from the global showpiece on September 16th, enabling him to take up a post in rugby from June 16th.

In the written decision released by the WRU, it is revealed that in October Howley was charged with making 364 bets on rugby union over a four-year period, using accounts with three different bookmakers held in his own name.

Howley “received the proceeds (or part of the proceeds) of the successful bets” and the former Lions scrumhalf accepted the charge “without qualification”.

The WRU’s policy and integrity manager Jeremy Rogers was contacted by an employee of Betway who claimed that Howley had placed bets on Wales games.

At a September meeting to explain the process for the investigation it was noted that Howley was “visibly upset” and said “I’m putting my hands up. If I was being evasive, I wouldn’t have used my works mobile phone and email account”.

It emerged that he placed a bet on a Wales player to be the first try-scorer in the 25-7 Six Nations victory over Ireland in March, but Howley stated that it was part of a treble bet, adding that it was part and parcel of his normal recreational betting activity.

However, he then conceded that he knew betting on matches involving Wales was a breach of World Rugby anti-corruption and betting regulations.