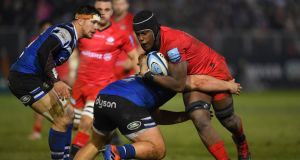 Maro Itoje is the sole member of England’s Rugby World Cup contingent to be named in the Saracens squad for Saturday’s Champions Cup clash with Munster.

The English and European champions were hit by a 35-point Premiership points deduction earlier this season after breaking league salary cap rules.

This prompted director of rugby Mark McCall to say domestic survival would be his side’s priority, and he has resisted the temptation of recalling his big guns for the daunting trip to Thomond Park.

That means there is no place for Owen Farrell, Billy or Mako Vunipola in the matchday squad - although Itoje has been named to start in the secondrow alongside Australia international Will Skelton.

Brad Barritt captains the visitors from inside centre, while Manu Vunipola is named at outhalf in the absence of his brothers.

Meanwhile Johann van Graan has made 14 changes to his Munster side, with prop Stephen Archer the only player to retain his place following last weekend’s narrow Pro14 defeat to Edinburgh in Cork.

Mike Haley returns at fullback with Andrew Conway and Keith Earls on the wings, while Chris Farrell and Rory Scannell are reinstated in the midfield. Conor Murray and JJ Hanrahan - who missed the chance to win the game for his side in their last European outing against Racing 92 - form the halfbacks.

Up front, James Cronin and hooker Niall Scannell join Archer in the frontrow. Jean Kleyn and Billy Holland are in the engine room while captain Peter O’Mahony, Tadhg Beirne and CJ Stander start in the backrow.