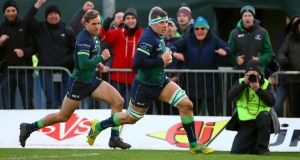 Connacht can a head into Christmas with a spring in their step.

Still alive in the fight for a Champions Cup quarter-final, Andy Friend’s side secured the required win – and although it was not the preferential bonus-point win it was a victory nevertheless that provides reward, hope, and momentum.

Time will tell if Connacht have enough to qualify, but after round three’s sixth defeat to Gloucester in European fare, and with only one win in Pool Five this season, Connacht a needed affirmation of their ability and belief.

They may have dithered for a while on Saturday, but two tries in the final four minutes capped a special night in the Sportsground – such moments much needed for Friend’s injury-hit outfit in their first season back in Champions Cup rugby after a two-year hiatus.

“Really pleasing,” says Friend. “That one was pretty special, compliment to the boys for sticking to and holding their nerve to get across the line.”

Champions Cup qualification or not, for now the win is a springboard going into the Christmas PRO14 interprovincial series .

“It is massive because It gets you back into winning ways and reinforces when we do the simple things well, and back ourselves, we can score amazing tries, and we can hold out good teams as well.

“In my head I felt we needed to get three wins and three bonus points, so will that bonus point we didn’t get today, or last week, or in Toulouse hurt us? Potentially. But I did say we needed a few things to go our way, so we will wait and see.”

While it is another tick in the box of teams Connacht had failed to beat in the past, Connacht now prepare in good heart for the upcoming series of interprovincials.

“It was really important to get that win and and build on that. We have Munster, Ulster, and Leinster which is a pretty big ask and something we are looking forward to. Everyone called it the interpro phenomenon last year because everyone gets up for those games, and I think we are just starting to become the team that gets up because we’ve just put on the jersey, and that is what we want to be.”

Heavyweights such as hooker Tom McCartney and lock Quinn Roux are expected back, but Friend says secondrows Ultan Dillane, Joe Maksymiw, and youngster Niall Murray are making selections difficult, while another is centre Tom Daly who, from a tackle, provided the pass to Robin Copeland for the winning try, which sent the 6,800 Sportsground fans into celebratory frenzy.

“Everyone keeps pushing themselves and climbing the ladder,” says Friend.

“I had a phone call on Tuesday night with Tom Daly. He asked ‘ Why am I not starting’. I said said ‘ Hang in there buddy, because you are going really well’.

“So when Tom comes on and does what he does, as sure as eggs are eggs we’ll sit down now and say ‘how can we leave this bloke out when he’s doing that?’. And that is what is happening.

“We have players doing that and pushing each other up the chart, and moments like that make our life as selectors pretty difficult.”

After the previous weekend’s 26-17 defeat at Kingsholm, Connacht reversed the stats, dominating possession and territory, conceded fewer penalties, and were 100 per cent on target with kicks.

Yet up until that final minute, they were staring at a home defeat. They had led 10-7 at the break, thanks to a first-half try from Caolin Blade, having been denied an earlier effort.

However the visitors posted the next four tries, the first from Grobler made immediately after the restart, and three in the second half – two from Mark Atkinson – the first following an intercept after 50 minutes and the second an end-to-end effort after Connacht had failed to find touch.

In between captain Lewis Ludlow finished off a break from Louis Rees-Zamitt just when it had looked like Connacht were gaining some momentum and had posted a Fitzgerald penalty.

Behind by 12 points, it look an impossible task for Connacht, but they took advantage of a yellow card and replacement hooker Shane Delahunt burrowed over with three minutes remaining.

Then came the astonishing last play of the game that saw Connacht retain possession from the restart and patiently go through the phases. Copeland was involved with a huge carry up the left wing, Bundee Aki continued the momentum, and a super offload in the tackle from Daly provided the replacement No 8 with enough space to finish off the try of the match.