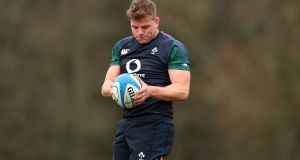 Jordi Murphy (above) and John Cooney have been released to play by Ireland coach Joe Schmidt for Ulster’s Pro14 match against Dragons. Photograph: Inpho

Ulster know there is no room for a misstep and with the exception of a disappointing 17-17 draw against Benetton – it doesn’t look as bad when weighed against the performance of the Italian side this season – Dan McFarland’s team have been in good form winning four of their last five matches, including a couple of Champions Cup victories over Racing 92 and the Leicester Tigers.

The Dragons coach Ceri Jones has made swingeing changes, six to the backline and three in the pack, to the side stuffed 57-7 by Benetton in Italy last weekend. Among those returning are international wing Hallam Amos, exciting fullback Jordan Williams and powerful backrow Taine Basham. The team is captained by Richard Hibbard.

The Welsh side have lost heavily in their most recent away matches but were denied by a point, 8-7, when Munster were the visitors in the Dragons last game at Rodney Parade. Jones was honest about his side’s shortcomings in performance terms of late.

“We’ve had a really good look at the make-up of the side because there are a lot of players vying for positions and some didn’t perform in Italy and they know that. The video review we did was tough and we need to learn from last week quickly and move forward.

“Over the last two months the performances have been of a certain level, with the exception of Clermont, which I have been pleased with. But I wasn’t pleased with last week and we have addressed it.” He’d expect a positive reaction from his players in front of their home supporters.

One aspect of Ulster’s performance last weekend that caught Jones attention was the lineout maul with hooker Rob Herring crossing for three tries in a man-of-the-match performance.

The tone for the game will be set up front. If the visitors can establish a platform and get the in-form Stuart McCloskey over the gain-line, then they have the finishing prowess out wide to take another step towards the playoffs.