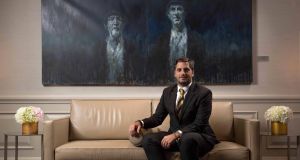 Agustin Pichot: World Rugby’s vice-president has his work cut out if he is to persuade nations and elite players to buy into the World League concept as it is currently being presented. Photograph: Billy Stickland/Inpho

In its eagerness to bring a 12-country World League into being, World Rugby has probably managed to antagonise many of its key stakeholders, with the Six Nations and the players uppermost amongst them.

No one doubts the sincerity of World Rugby vice-president Agustin Pichot, the main driver behind this proposed World League, and its CEO Brett Gosper in seeking to revive the fortunes of the international game.

The need for increased revenue from the international game is particularly acute in Pichot’s native Argentina and the Southern Hemisphere. But the manner in which it is being presented has actually not helped its cause, besides which the proposed league, as it is being mooted, has more holes than a soup strainer.

Let’s start with Test rugby’s four crown jewels, the Six Nations, the Rugby Championship, the World Cup and the Lions. At a stroke, this proposed World League would most likely damage all of them and, in the case of the Lions, probably cause its demise, so denying Australia, New Zealand and South Africa a huge cash injection every 12 years.

The Six Nations and the Rugby Championship would remain standalone tournaments, but would become qualifying mechanisms for the World League semi-finals and final. Over time, it would surely devalue the international game’s oldest tournament.

The proposed League would also see the Rugby Championship revamped by scrapping the home-and-away format for a round-robin itinerary. Even if New Zealand and Australia were to arrange a second Bledisloe Cup match outside of the league, the Southern Hemisphere big three would be sacrificing home games against each other every other year for games at home to Japan and the USA instead. It is understood that South Africa are decidedly lukewarm on this proposal.

The quadrennial World Cup would invariably lose much of its lustre and appeal if there was a World League in each of the intervening three years. And it’s hard to envisage how a Lions’ tour could be squeezed into a year containing a World League, or if it did the demands on many of game’s leading players would simply be intolerable.

Which brings us to the players. Representatives of the International Rugby Players Association met amongst themselves at the World Rugby awards in Monaco at the end of November, and then with World Rugby chiefs, to outline their concerns.

Despite World Rugby’s latest statement yesterday reaffirming their “unwavering” commitment to player welfare and to “ongoing discussions”, the prevailing mood among the players is that the world governing body merely pays lip service to player welfare and that they are not being consulted sufficiently. So it was that the IRPA statement also made mention of “inconsistent engagement”.

Having a public spat with the IRPA subsequently, by expressing their surprise at the manner in which the players raised their concerns, seems like a curious way for World Rugby to do business.

With a supreme sense of irony, though no doubt unintended, the game’s governing body announced the appointment of former Irish and Lions team doctor Dr Éanna Falvey in the newly created role of deputy chief medical officer, before assuming the position of chief medical officer from Dr Martin Raftery in January 2020, under the heading: “World Rugby reaffirms player welfare commitment with appointment of Dr Éanna Falvey.”

Were this league to come into being Ireland, and this example applies to all the other teams in the Six Nations, would be obliged to play three games on successive weekends on their summer tours. These could be against, say, Australia, New Zealand and Japan, or the USA, South Africa and Argentina, thus raising the likelihood of increased long-haul travel through different time zones at the end of long seasons rather than three-Test tours in one country.

The players are also not alone in expressing their fears for Tier Two nations and the integrity of international rugby. In chasing the mighty buck, the USA (ranked 13th in the world) would be included to the exclusion of Fiji, who beat France in Paris last November and are ranked ninth.

To be excluded from this league for a dozen years would sound the death knell for the Pacific Islands, with even more and more of their players migrating to other countries. To ring-fence a dozen countries would also make international rugby as much of a closed shop as it has ever been, albeit Pichot could not have been more clear-cut in expressing his belief in promotion and relegation yesterday.

With or without promotion and relegation though, when the Southern Hemisphere teams head north for the end of year finale, the three rounds of matches would immediately be followed by semi-finals and the final, in turn meaning five games on successive weekends.

On behalf of the players, Johnny Sexton noted that such a proposal was simply “out of touch” with the demands of modern day Test rugby and, as Kieran Read suggested, it would lead to fatigued players competing in weary end of year games.

These games could in turn eat further into the club calendar, which is liable to have club owners further up in arms. This is also why the Six Nations have thus far managed to stave off demands from the English club owners to have the Six Nations compressed from seven into six weeks. For example, see how Sergio Parisse, Finn Russell and others missed out through injury last weekend.

With yet more demands being placed on them in the Test arena, it’s conceivable that leading players will increasingly turn to more lucrative contracts with clubs. Hence, in seeking to enhance the international game, World Rugby’s ‘League’ might prompt more players to abandon it.

So, World Rugby have, either directly or indirectly, managed to antagonise almost everybody that matters, which merely shows how cack-handed this proposed World Rugby League has thus far been handled.