Italy v Ireland: All you need to know ahead of the battle in Rome 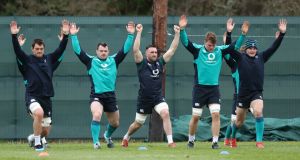 Ireland are back on track on the Six Nations, after steadying the ship with a 22-13 win away to Scotland in round two, following an opening weekend defeat to England.

On Sunday they travel to play to Italy in Rome, knowing a very attainable bonus-point victory is a must if they are to have any chance of retaining their title.

And even if they do put Conor O’Shea’s Azzurri to the sword at the Stadio Olimpico, their Championship hopes could already be all but over, with England taking on Wales in Cardiff on Saturday night.

But regardless of what happens in Cardiff, Sunday’s game is a chance for Joe Schmidt’s side to get back to their dominant best, and perhaps to play some attacking, free-flowing rugby.

It is also an opportunity for some players to get minutes into their legs, to rediscover some form and to secure their place in the starting XV for the rest of the tournament and beyond.

And, most importantly, it’s a chance to have some fun. Here is everything you need to know before Ireland’s gladiators enter the Colosseum.

Ireland travel to play Italy in the third round of the 2019 Six Nations, at Rome’s Stadio Olimpico.

The game kicks off at 3pm (Irish time) on Sunday February 24th.

The game is being televised free-to-air by Virgin Media One (coverage starts 2pm) and on ITV (coverage 2.15pm). You can also follow it on The Irish Times liveblog, from 2.30pm.

There are, actually. Providing you can make it to Rome – or perhaps if you’re passing through – there are still tickets on sale here, with limited availability in most sections of the Stadio Olimpico.

Ireland travel to Italy still yet to hit top gear, after an opening weekend defeat to England was followed by a convincing, if uninspiring, victory away to Scotland a week later. The defending Six Nations champions were physically blown away by the English, shattering some of the feel-good factor which surrounded Irish rugby factor heading into 2019. Scotland were error-prone and profligate at Murrayfield, but Schmidt’s side did the job professionally and were fully deserving of their win. They may, however, be left to rue their failure to secure a bonus point.

Italy meanwhile remain without a Six Nations victory since 2015, but they have delivered two honest performances in the Championship thus far. They were blown away in the opening stages by Scotland at Murrayfield but rallied in the last 10 minutes, losing 33-20. A week later they dug in and made life difficult for a largely experimental Wales side, Warren Gatland’s visitors having to work for their 26-15 victory in Rome.

Ireland are without Garry Ringrose again for the trip to Rome as he continues his rehabilitation from a hamstring injury, however Chris Farrell is fit to start in the midfield. After a mini-locking drought Schmidt now has Iain Henderson back on the bench, and there's no place for Tadhg Beirne on the matchday squad. Ultan Dillane and Quinn Roux start in the secondrow. Along with Dillane - Sean Cronin, David Kilcoyne and Jordi Murphy come into the team. Jack Carty is on the bench with Joey Carbery missing out through injury.

Italy meanwhile have one glaring absentee – captain Sergio Parisse. He suffered a concussion in Stade Francais’ defeat to Lyon last weekend and will miss Sunday’s game. Italy will have to prepare for life without the 35-year-old soon enough, but would have counted on his availability against Ireland.

The two sides have met 19 times in the Six Nations since Italy joined the competition in 2000, with Ireland coming out on top in 18 of those.

Ireland’s maiden defeat to the Azzurri was the final act of the Declan Kidney era, with the IRFU terminating his contract in April, after a fifth-place finish in the Six Nations.

Seven members of that side are in line to start again six years on. For Italy, Leonardo Ghiraldini is the only survivor.

Time to play some jazz?

Sunday presents a chance for Ireland to rediscover their attacking mojo – they were often far too narrow in their fixtures against England and Scotland. In his column on Wednesday, Gordon D’Arcy wrote that the championship is as good as over, so now is the time for Schmidt’s side to throw off the shackles.

“I’ve been lucky to experience that feeling in big games. The Grand Slam day in Cardiff (in 2009). I never got caught up in the madness and tension, just kept hopping from play to play. These are the joyous moments. When you are barely aware of your surroundings. Beating Australia in Eden Park. England at Croker. You’re just out there playing.

“These last three weekends of the Six Nations should be just about that. Unleash the offensive qualities. It won’t win us anything but it will fill the team with confidence.”

You won’t be making much money off an Ireland victory:

New Zealand’s Glen Jackson is in charge on Sunday.

No Parisse? No problem.

Keep at it lads, second place is still up for grabs!