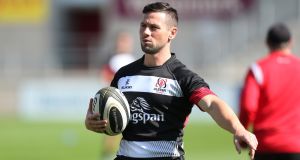 Ulster backrow forward Sean Reidy will earn his 100th cap for the province on Sunday when they travel to take on Dragons at Rodney Parade (Kick-off 3pm).

Reidy, who made his debut versus the same opposition at Kingspan Stadium in November 2014, has been named to start at blindside flanker. He will be joined in the backrow by Nick Timoney and Jordi Murphy, who is one of just three changes from the side that secured a 54-7 bonus point win versus Zebre last week.

The other two changes to the starting XV are at halfback, with Murphy’s international teammate scrumhalf John Cooney also released from Ireland duty, while Billy Burns returns to start at outhalf.

Alan O’Connor will continue to captain the side from the secondrow, where he is once again paired with Kieran Treadwell. Rob Herring - who scored three tries in a man of the match performance last weekend - retains his place at hooker, with props Eric O’Sullivan and Marty Moore completing the front five.

The familiar duo of Stuart McCloskey and Darren Cave combine in midfield, while Rob Lyttle, Robert Baloucoune and Louis Ludik make up the back three.