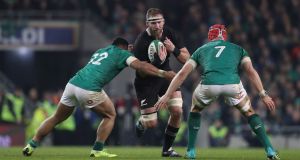 Ireland would meet the All Blacks once a year in the proposed World League. Photograph: Billy Stickland/Inpho

World Rugby is planning a revamp of the international calendar with the launch of a 12-team World League from 2020 that will include Six Nations and Rugby Championship sides as well as the United States and Japan, New Zealand media reported on Thursday.

New Zealand Rugby Chief Executive Steve Tew said it was too early to talk about changes to the calendar.

“We continue to work very hard on a number of iterations for the future of the international playing calendar, but we are not in a position to discuss any of the detail at this stage,” Tew said in a statement.

“We will share more details when we are able to.”

Southern hemisphere rugby’s ruling body SANZAAR said they had no comment to make on the report while Rugby Australia were not immediately available to comment.

The competition has long been mooted by World Rugby vice-chairman Agustine Pichot, who has said the international game was under threat and struggling financially.

The game’s powerbrokers discussed the proposed competition during a World Rugby meeting in Los Angeles in late January, several media outlets have reported.

The NZ Herald said the format had received “universal support” and that an unnamed broadcaster had already tabled a proposal for the television rights, worth about an additional NZ$12-$14 million for each country.

The format would see the teams playing each other once in a year and culminate in semi-finals and a final in the northern hemisphere in early December, the report said.

The World League would not be held during World Cup years and would not feature promotion or relegation, ending the hopes of emerging European sides like Georgia, Russia and Romania as well as the Pacific Island nations of Fiji, Samoa and Tonga of getting more regular competition against Tier One nations.