Connacht should just about have edge to see off playoff rival 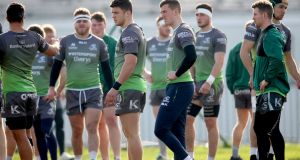 Three points separate the combatants in Conference A so the implications are significant for the team that manages to eke out a victory in Galway.

Munster and Glasgow have disappeared into the sunset a little but Cardiff, Connacht and the Ospreys are in a scrap for the playoffs and what will add further spice is that they play each other over the coming weeks.

Connacht coach Andy Friend has been able to call upon a significant portion of Connacht’s Ireland squad contingent with Tom Farrell restored to the centre and last weekend’s Irish secondrow partnership in Rome, Quinn Roux and Ultan Dillane, donning a different shade of green. Caolin Blade is included among the replacements.

The Ospreys are missing a dozen players through injury and international commitments but can still field a team laced with experience.

Head coach Allen Clarke admitted: “There’s frustration that we’ve been on the wrong end of score-lines in each of the previous three games but also a realisation that we have the solutions to deliver a more complete performance. Games against Connacht are always testing and exciting; our focus is to be the best version of ourselves.”

The Welsh club were beaten by Glasgow (away) and at home by both Ulster and Munster in their last three outings, albeit narrowly and will be aware that as the league swings towards the business end of the season, they can ill afford another defeat, particularly against a playoff rival.

Former underage international Stephen Fitzgerald has shown an aptitude to shine at this level, strong running centre Peter Robb should give his side a physical presence on the gain-line while the Connacht pack is particularly strong.

Matt Healy and Tiernan O’Halloran can create and exploit space with their footwork and lines of running, especially from loose kicking or turnovers. Kyle Godwin, a fine footballer who has played more often in the centre, partners Kieran Marmion at halfback.

Denis Buckley and Finlay Bealham give Connacht a cutting edge in the scrum, while Roux and Dillane were both conspicuous and effective in their efforts against the Italians last weekend. There is a nice balance to the backrow with Eoin McKeon providing the power and Colby Fainga’a and captain, Jarrad Butler, essentially two openside flankers, a threat at the breakdown.

All three link the play intelligently and with Paul Boyle on the bench Connacht are able to maintain that quality through the 80-minutes. Tom Daly has settled well since moving from Leinster and along with Cian Kelleher gives Friend options to change up the game.

The Connacht coach expects a reaction to last week’s thumping defeat to the Glasgow Warriors. He said: “We have trained well and prepared well this week. We have seen a really positive response from the players after a disappointing result.

“We will continue to focus on our game and what we can control, as we have done all season. We know every game now is a must win and with a two week break before our next game we are determined to finish this block on a high.”

The Ospreys possess serious pace in the back three, fullback Dan Evans flanked, by the speedy Hanno Dirksen and in particular Keelan Giles. Former Lion and Wales international James Hook gives the visitors a second playmaker in the midfield. The pack may lack a few marquee names but still contains several internationals.

Connacht should just about have enough to finish this sequence of matches on a high.