Tom Farrell keen to hit the ground running at Connacht 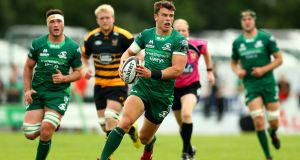 By any yardstick, 2017-18 was a mixed bag for Connacht but there were some shafts of undoubted light, and in an individual context none more so than Tom Farrell.

Having come aboard in January 2017, in his first full season Farrell was a consistent source of potent, go-forward ball for the province in a wildly fluctuating campaign.

Nicknamed Mr Wobbler by his team-mates for the running style with which he did regular damage last season, in his 18 appearances Farrell was among the highest performers across several categories. Uppermost among these were defenders beaten (61), off-loads (44) and metres made (672).

He could yet be a bolter for the World Cup, although the 24-year-old is up against some stiff competition in the post-Gordon D’Arcy-Brian O’Driscoll era.

A product of Castleknock College, Lansdowne and the Leinster academy, Farrell relaunched his career with first London Irish and then, just as courageously, with Bedford before Connacht came calling midway through the 2016-17 season on foot of a midfield injury crisis.

“The road less travelled,” he says with a chuckle. “I think a lot more guys are going over to England now, and kind of parking the ego and taking that step down into the Championship if needs be. For me it worked out well. It mightn’t be the case for everyone and I was quite lucky that Connacht had an injury crisis at the time. Pat [Lam] and Timmy [Allnuttz] and Willie [Ruane] were good enough to give me my chance and I’m forever grateful to them.”

He’s since signed a two-year extension.

“I’m loving it here. It’s a great bunch of lads, on and off the pitch, there’s a very good environment. I think particularly this season, there’s a good atmosphere.”

Cue the 2018-19 season, which looks like being something of a defining year in Farrell’s career.

“Obviously I want to back up last year as much as I can. But although I got some accolades and praise, it wasn’t a perfect season. I did make mistakes, like everyone else. I did have bad games, which probably just highlighted my good games. I have a lot to work on this season and I’m by no means the finished article.”

In this he identifies on-field communication, particularly to those inside him, and identifying space. Sounds like another Joe Schmidt disciple.

Hence, he also says his focus right now is Connacht, where the arrival of Kyle Godwin has further strengthened the midfield competition.

“I think we’ve nine centres at the moment.”

No less than Connacht collectively, like so many others across the provinces in these teething stages of the season, opportunity knocks, and first up at the Sportsground tomorrow for the 2016 champions is the 2015 title winners.

“Essentially it’s a Scottish international team so we’re fully aware of the challenge that’s ahead of us,” says Farrell.

“We showed against Leinster last game of the season what we’re capable of, so we want to emulate that performance as best we can. I think if we do other teams will find it hard to live with us, especially in the Sportsground.”