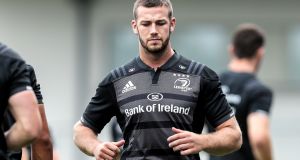 Even with many of the frontline international players in a staggered comeback and still a few weeks away from playing, head coach Leo Cullen has managed to field a strong and versatile Leinster side for their first match of the season (kick off: Friday 7.35pm - live on eir Sport/TG4) in Cardiff Arms Park.

It’s a difficult start and Leinster will have to play a slightly different game on the Blues plastic pitch. To that end Cullen has plenty of mobility in the travelling squad.

New signing Joe Tomane makes his league debut in the centre, although he can play around the pitch and is a strong wing option too.

The players have been impressed with the 28-year-old since he arrived from Montpellier over the summer. Given the makeup of the Leinster team and the retirement of Isa Nacewa at the end of last season, his experience at all levels is added value to the team as well as Rory O’Loughlin, who starts outside him in the centre.

One to watch Caelan Doris will make his first start having made his debut from the bench away to Connacht last season.

Dave Kearney, Adam Byrne and last season’s Pro14 top try scorer Barry Daly gives Leinster a pacey threat from all sides, while in the half backs Leinster have two strong controlling influences, which they badly missed against Newcastle in their friendly in Donnybrook a couple of weeks ago. Scrumhalf Luke McGrath, who came on against Newcastle and made some difference, is partnered by Ross Byrne who wins his 50th cap for the province.

The front row consists of Peter Dooley, James Tracy and Michael Bent, with Ross Molony and Scott Fardy in behind them. The backrow provides a snapshot of Leinster present and future with Josh Murphy and captain Rhys Ruddock starting on the flanks with the impressive Doris at number eight.

“What we want is a fast start,” said new coaching recruit and former Leinster outhalf, Felipe Contepomi. “We had a good preparation towards this game. I think there’s a great buzz and we know the challenge we are facing. They are also European Champions, you know Challenge Cup champions. We are definitely up for that.”

“It is a great way for us to kick-off the season - the European Challenge Cup champions against the Pro14 and Champions Cup winners,” said Cardiff head coach John Mulvihill.

“You have to play the best and it will be a massive challenge but if you saw the way these boys finished last season, they love a challenge and that will certainly be coming at us on Friday night.

“We’ve had two solid pre-season games without being outstanding so it’s about us learning from those two experiences and making sure we get things right on Friday.”

While Leinster completed the league and cup double Cardiff Blues finished last season winning 11 of their last 13 matches after a slow start. It caused them to miss out on the playoffs. That is certain to be on their minds on Friday night.

1 Bryson DeChambeau trainer insists muscle gain is not down to steroids
2 Paul Stirling’s heart over head decision to play on for Ireland bears fruit
3 Sporting Cathedrals: Le Stadium - European fortress of the mighty Toulouse
4 Leo Cullen says rotation will be key as Leinster look to keep on winning
5 Rory McIlroy hoping course-and-distance form will stand to him at Harding Park
Real news has value SUBSCRIBE