In total TG4 will have 28 live games, including the final, for free-to-air coverage 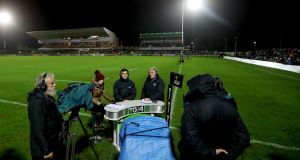 Throughout its many changes in participants (26), tournament formats, sponsors and broadcasting partners (22 and counting), one aspect of the Pro14 has remained constant, namely TG4.

Under its own previous guise as TnaG, the Irish language public service broadcaster has been covering the competition since its inception in 2001 as the Celtic League, and is back on board for another three years to provide the sole free-to-air coverage of the competition in Ireland.

In addition to all of Connacht’s 11 home games, this season TG4 will also have live coverage of all the Irish-Welsh games involving Connacht, Leinster and Munster, beginning with the Cardiff-Leinster game tomorrow night and Connacht-Glasgow on Saturday.

In total, they will have 28 live games, including the final. They will also have deferred coverage of a further nine interprovincial derbies, as well as a weekly highlights package.

“The free-to-air element for the tournament itself is very important, and it’s important for us to have it on our schedule, just to drive viewers towards our channel,” said Rónán Ó Coistealbha, TG4’s Head of Sport at the launch of their coverage for the season in the Sportsground yesterday.

“The Pro14 had to bring in the likes of eirSport and Premier Sport to up the revenue. We understand that, but we’re very happy with what we’re getting out of it. Nearly every game involving the four Irish provinces, whether live, highlights or deferred, are going to be seen on TG4, so it’s great for us.”

Iris Productions, who previously have produced rugby documentaries ‘The West’s Awake’ and ‘The Brave and the Faithful’, will provide coverage of the Pro14 on TG4 for the first time this year and its Executive Producer, Kieran Hartigan, is in talks with other former internationals as part of what Ó Coistealbha regards as very much a three-year project.

Unlike S4C in Wales, there is no red button in order to switch to English, but while the commentary and main analysis is in Irish, Horan’s contributions, along with pre-match and post-match interviews, are conducted in English.

“We’re funded by the department of communications,” says Ó Coistealbha. “Our remit is to promote the Irish language. That’s why the Government set us up. But at the same time, we’re very conscious that our rugby audience is a national audience. It’s not the Gaeltacht. We don’t have many people in Connemara, west Kerry watching or Donegal watching our rugby coverage. We know that there are 32 counties, and abroad, watching us. We’re very conscious of that.”

“For us it’s a balancing act, because we need to be careful of our remit, but the bottom line is that we’re providing a service and rugby fans know this. Twenty years ago, when we started doing the interpros in 1999 and 2000, and then Celtic League started in 2001, we were getting a lot of criticism because rugby audiences hated the Irish language. We don’t get that any more. We haven’t got that in 10 years. People are used to it now.

“They appreciate that 10 or 15 years ago, RTÉ wouldn’t have gone near the Celtic League. We stuck with it through thick and think, and here we are now, the tournament is still blossoming and growing. Sometimes we might be the architects of our own downfall, and get out bid for TV rights, but we’re still there for another three years, providing a service. That’s what we do, a good service, hopefully.

“We’re doing 28 live games altogether so it’s brilliant for us. I don’t mean this with any disrespect, I have no idea what household reach eirSport have nationally. They’re rolling out their broadband. That’s their objective, which is fair enough. But I think we have an advantage because we are available to 100 per cent of homes in Ireland. Every household in Ireland has TG4. If not, just go on line on the player on tg4.ie. The game is there. If rugby fans want to see the game on a Friday or Saturday, it’s there, and that’s our main objective.”

Live coverage of the Pro 14 last season on TG4 reached 1.7m people, or 41 per cent of the total TV population. Average viewing per match was 64,000 individuals, equating to a 6.3 per cent share of viewing.

Last season, six matches averaged more than 100,000 viewers on TG4, including the final on May 26th (116,000 individuals/11.7 per cent share of viewing) and the Munster v Connacht game on January 6th (140,000 individuals/9.4 per cent share of viewing). During the regular rounds of the competition (rounds 1-21) the most popular province among TG4 viewers was Munster. Thirteen of their matches were shown live, averaging 81,000 viewers per game.