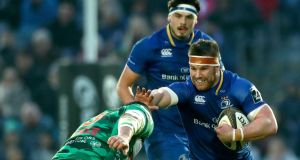 Sean O’Brien has never been a player to see ill everywhere in rugby. He’s no woe -is-me merchant – more the pragmatist about his body and what playing professionally does to it. O’Brien’s directness has an authentic no-frills quality about it. He uncomplicates things.

He is, he says, as fit as he has ever been. Looking to get some pitch time in the coming weeks, probably late September, his fresh optimism follows a season that seemed to collapse around him between the 2017 Lions Tour and Leinster’s 2018 double.

That and a procedure to clean up his shoulder and hip holed him rightly below the waterline last season.

“Probably in better shape than I have been in my life,” he says. “So I should be in the best place I have ever been in my career when I come back.”

He says it all knowing there are no guarantees. With the premature retirement of Welsh captain and flanker Sam Warburton a reminder of the body’s limits, O’Brien’s admired abrasive style doesn’t arrive without some reflection. In that vein, the Irish backrow would appreciate more protection from referees.

O’Brien is a tough player. If he senses danger there is danger. He has come to realise that the ‘poach position’, a crouch over the ball at breakdowns, has become one of the most vulnerable places to be on the pitch.

It was Warburton who said that getting smashed on the ball was one of the verities of the game and likely the cause of his retirement. Although last season was one for him to forget on a personal level, the surprise is O’Brien has not been sidelined more often.

“I know what you mean,” he says.  “I always say at the breakdown some referees, they let you get . . .you could be in a poach position, and you’ll take one big hit or someone will smash you and you still survive it.

“In terms of that, I don’t know what has to be done around that area. Definitely there’s something about different styles of refereeing. Definitely some referees get you in trouble. A lot. Especially when you’re in that poach, vulnerable position.”

Woe betide any player trying to jackal the ball like Warburton, Australia’s David Pocock or O’Brien. Those “big loose pieces” that were in his shoulder and capriciously struck him down sometimes and other times didn’t are no longer there.

When he came home from the Lions tour the shoulder settled down and he might have persevered. Then it flared up depending on how hard and at what angle he was hit. He might have gotten away without an operation for a few more years. But he didn’t.

Maybe that is in part the reason the 31-year-old feels vulnerable, even imperilled taking “free” hits from players with bigger dimensions and greater mass.

Ryans’s view rhymes with that of O’Brien. The attitude, said Ryan, seemed to be not to worry about binding or players staying on their feet at a breakdown.

“Just hammer into that player and then judo/saddle/crocodile roll him out of the way, using your weight and power,” he added.

In real time during matches O’Brien has voiced his opinion. He has called the hits for what they are. Nothing much has changed.

“It’s one against three or four usually and they’re smacking you at force. That’s where people can get hurt. My point is at times how many do you want us to survive?”

He understands the season is an assault course with a World Cup at the end. His age profile means it could be his last chance at helping Ireland break through the quarter-final barrier. On that he suggests people need to cool their jets. First things first.

Leinster have some titles to defend and O’Brien is at the forefront of that.  Fullback Rob Kearney at least believes so. All that club success and being consigned to a watching brief from the periphery, having been a central figure, was a hard place to be.

“It must have been so tough for Sean last year watching that,” said Kearney. “Although you want your team to win, there is a big part of you that doesn’t want them to win without you.

“He’s going to be like a caged animal when he gets back on the field. That will be brilliant for us. It will bring a huge amount of energy to the squad. If he’s back and fit and playing, he’ll be a huge driver.”

O’Brien senses people sometimes look at him and say he’s always injured. He’s not now. After two or three games – “I’ll be flying,” he says. He looks up and says with just a hint of relief.

“I’m probably stronger in every asset.”