Jack Carty and Connacht primed for ‘month of champions’

Early home games against Glasgow, Scarlets and Leinster could set tone for the season 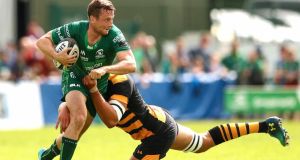 For Connacht, TG4 has dubbed September the month of champions. The 2016 title winners kick off their Pro14 campaign against the 2015 champions Glasgow in the Sportsground on Saturday, before Scarlets, winners in 2017, and reigning holders Leinster come to Galway in rounds four and five.

With Michael Bradley’s Zebre, who did the double over his former side last season, also due in Galway on Saturday week, the month sees four home games sandwiching one away assignment against upwardly mobile Edinburgh.

Opportunity knocks, but as Jack Carty knows from past experience, a slow start could prove very costly.

Three seasons ago, five of their first seven games were at home and they won them all, as well as picking up two bonus points away to Glasgow and beating the Ospreys, and then taking Munster’s scalp en route to the title.

Undercooked two seasons ago, Connacht lost at home to Glasgow (41-5) and the Ospreys (32-11), as well as away to the Scarlets in round three, and never recovered. Ditto last season when – beginning with another defeat at home to Glasgow – they lost five of their first six.

“Not since we beat Glasgow back to back at home on the way to winning the title have we given them a really good tussle,” admits Carty. “Last year, in the first game of the season, there was a torrential downpour, so you’d be hopeful that the weather will be nice and dry this weekend so that we can play the game we want to bring to them.”

From the outside, Connacht appear to have undergone a tumultuous few years, from the highs of the 2016 title, to the anti-climactic final year under Pat Lam and the coming and going of Kieran Keane last season, so prompting another new dawn under Andy Friend, the well-travelled coach whose most recent stint was with the Australian Sevens.

But Connacht have beaten Brive, Wasps and Bristol in pre-season, and Carty points out that the backroom staff have remained largely unchanged.

“A lot of the main messages, and the way we want to play, are quite similar. Andy has brought in certain things from the sevens set-up in terms of restarts and our breakdown and a few minor tweaks, but I’d say overall our game will be more simplistic from what it’s been in the last two years,” he said.

Connacht mixed the highs (three home derby wins for the first time ever) with lows last season. For all their licence to play, when not switched on they lacked intensity and accuracy, and could look a little headless. They’re now being given a framework in certain areas of the pitch, while then encouraged to play what they see, and Carty says: “It’s important that the overall picture of what we’re trying to do on the pitch is crystal clear and that’s what Andy has brought in.”

With that 2016 success, Connacht and particularly their bigger support base, can no longer be content with the inconsistencies of last season when finishing 24 points outside the play-off places and 15 behind Champions Cup qualifiers Cardiff Blues.

“There’s no point in getting up for the Leinster, Munster and Ulster games, which is quite easy to do, and then not backing it up against the Scottish, Welsh, Italian or South African teams,” says Carty.

“We’ve talked about that, and our away form [one win in 11 last season]. It’s  important that first and foremost we win our home fixtures and then pick up the few wins away.”

A realistic target would be a play-off place and with it qualification for the Champions Cup.

“That was the goal we set the year we won the title before we then reassessed and I don’t see why we can’t do that again this year, with the squad we have, and the fellas who came in, Copey [Robin Copeland], Kyle Godwin and the guys from the academy as well.”

“Over the years I’ve seen fellas come in and out, and I think that has pushed me to be a better player. In any aspect of life and work, I think it’s important to have someone breathing down your neck.”

Ironically, Horwitz has moved in with Carty for a few months, but he hasn’t been tempted to give him food poisoning.

“Dave is pretty on point with his food. I’m learning off him. But it’s been great to get to know him. He’s a pretty vocal fella and it’s been good to bounce things off him. He’s a big physical unit and he also has a good running game.”

Connacht also have Craig Ronaldson as an option at 10, with Carty’s younger brother, Luke, in the academy. But as for himself, Carty says: “My main goal this year is to play as well as I can to help the team qualify for Europe and win silverware. The growth in my kicking percentages from the year before to last year, it was up to 77 per cent, so I want to push that on into the 80s this year and bring more consistency to my defence.”

Starting in the month of champions.

1 Leo Cullen says rotation will be key as Leinster look to keep on winning
2 Paul Stirling’s heart over head decision to play on for Ireland bears fruit
3 America at Large: When not taking one for the team is the wisest course of action
4 The Offload: Schools rugby talk in the Seanad appears tone deaf
5 Harding Park, named after a lousy US president who never stepped foot on it
Real news has value SUBSCRIBE