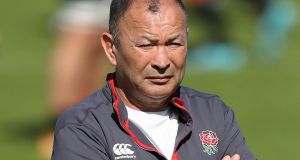 England have been dealt a significant blow just over a year before the World Cup with another key member of Eddie Jones’s staff set to leave. Dean Benton is due to depart his position as the head of sports science, leaving Jones with another sizeable hole in his backroom staff to fill.

The England head coach is still to appoint a replacement defence coach following Paul Gustard’s departure to Harlequins over the summer and the turnover of staff under Jones – a notorious taskmaster – was unusually high even before it emerged Benton will be moving on. Jones is also without an attack coach, having not yet made a permanent appointment after Rory Teague’s departure to Bordeaux in May 2017.

Benton came with considerable pedigree, having worked with the Wallabies in the buildup to the 2015 World Cup, but he left just 11 weeks before that tournament and was recruited by his fellow Australian Jones in 2016. Until now, he has been a key part of the head coach’s plans to make his side the fittest in the world and a number of players sung Benton’s praises when England were lauded for how strongly they finished matches during their long unbeaten run at the start of Jones’s tenure. More recently, however, and on a run of five defeats in their last six Tests, England’s training methods have come under fire.

Jones does at least hope to have John Mitchell, the former All Blacks head coach, in his ranks as Gustard’s replacement by the time he names his squad for England’s next training camp on 20 September. Mitchell, who worked as forwards coach under Sir Clive Woodward, is contracted to the Blue Bulls until October 2019 but while discussions continue the RFU has yet to reach a financial agreement with the South African side. Jones is also hopeful of appointing Scott Wisemantel, who acted as attack coach on the summer tour of South Africa, on a more permanent basis. – Guardian