McFarland undaunted by the big challenge ahead at Ulster 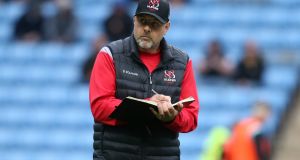 Dan McFarland: “I’m not going to look too far. I’m going to take one step at a time as a coach.” Photograph: Matthew Bunn/Inpho

The job hasn’t exactly provided the greatest career move for his predecessors, but Ulster’s new head coach Dan McFarland is only interested in what lies ahead and building something of value for the embattled province.

McFarland has outlined his philosophy for turning things around at the Kingspan – still reeling from last season’s tumult – with a longer-term view being uppermost in his plans rather than committing himself to finding a quick fix.

In his first interview since finally taking over at Ulster last week, thanks to the securing of an early release from the sticking point of his notice period as Scotland assistant coach which would have seen McFarland potentially not available until January, the highly-rated 46-year-old – first appointed last April – was pragmatic in what he intends to bring to Ulster.

“This is a slowly, slowly process,” said the former Connacht player and assistant coach who left the western province in 2015 for Glasgow Warriors. “For me, coming in, my feet are here [on the ground] and I’m not going to look up too far. “I’m going to take one step at a time as a coach,” he added of his first head coach role.

“Given the amount of change here over the summer (citing senior players departing, coaches leaving and support staff moving on) there will be a loss of cohesion. That’s what happens in those situations and any organisation needs cohesion for it to work well.

“So for me, at the moment, it’s about experiencing, understanding, getting to know people and then beginning to pull them together in terms of the togetherness that is necessary.”

McFarland, who revealed his own Ulster connection through his grandfather who was a native of Belfast and studied at Queen’s University, expanded more on how he hopes to make his mark at the Kingspan.

“I see a successful legacy [here],” the Oxfordshire-born former prop said. “So what is the first thing I do? I look for clues for what it is that brought the success in the first place, where are they? Draw those out and keep them. I remember when I came up here to play it was the fight-for-every-inch mentality that you came upon on the pitch.

He continued: “Nothing was given for free and when I look at the players now that’s the first thing I’m looking for.”

The Pro14 season kicks off on Saturday when Ulster – who should have short-term signing from the Brumbies , Henry Speight, in the squad – with a tough-looking opener at home to the Scarlets.

“It will be a great test and a barometer for us in terms of where we are,” said McFarland whose squad have lost both their pre-season friendlies against Gloucester and Wasps.

“It’s the first chance for me to really find out about the guys,” he added while also tipping his cap to bringing through young talent north of the border.

McFarland continued: “Am I going to limit us on what we can do? Absolutely not, because I have been burned on that sort of thing before.

“Am I going to set expectations for them. No that would silly. The expectations in terms of achievements will be in our day-to-day processes. If we get those expectations right we will be able to take one step at a time and get where we are going.”

The journey looks a lengthy one.