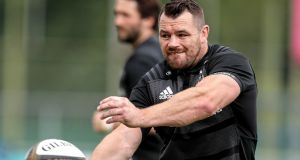 Whatever about Cardiff and the first Pro14 match, this season presents a whole new landscape for Leinster. Drilling down the halfback pairing of Luke McGrath and Ross Byrne, who start tonight, should become more important to Leinster’s success as the season drives forward.

While Conor Murray, although injured now, commands the first-choice thinking of Joe Schmidt, there is a scattering of players capable of a supporting role come the Tokyo World Cup – and McGrath is among them.

The position of Byrne has mushroomed in size since last season, where he proved to be a valuable and capable Leinster asset. This season even more so and, in the absence of Joey Carbery and Johnny Sexton to closely monitor his hours on the pitch, Byrne’s status will rise further.

The cover for him at outhalf and for inside centre is Noel Reid, who, if he makes an appearance from the bench at 10, would be reverting to the position he played in school for St Michael’s College.

The pressure will come on Byrne, not only as a pivot. But, in the absence of the retired Isa Nacewa, he and others will be forced to make more contributions to fill in a vacancy that in truth is probably not possible to fill.

“Stuart [Lancaster] made it evident early on that someone’s going to have to step into that void, and it’s not necessarily one player,” said Leinster outside centre Rory O’Loughlin. “There’s been a number of people who have stepped up. Ross Byrne is back training fully at outhalf and he’s driving the attack, then myself and a few of the centres have taken the onus in defence.

“It has been made clear to us that there are moments players are going to have to step up when it would have been Isa. It’s only when he’s gone that you realise how often he did that through the season.”

Leinster’s pre-season match against Newcastle in Donnybrook was a good idea in theory to play on plastic before travelling to Cardiff for the first match, which is a meeting of the European Champions Cup winners and the European Challenge Cup winners.

In practice, and after 42 points against Leinster, it probably didn’t work out for head coach Leo Cullen, the run-out on the synthetic surface giving a sprinkling of the players who start today, including McGrath and Joe Tomane, at least a feel for the surface.

Tomane is another font of experience. Making his league debut from Montpellier over the summer, the 28-year-old has shown enough to the Leinster players over a half of a pre-season game and a bit part of another before going off injured for nobody to sweat.

Capped by Australia, Tomane’s versatility in the centre and wings, as well as his explosiveness and an ability to free his hands in the tackle and take care of the offload, will add to a side not short on pace.

The back three of fullback Dave Kearney, Adam Byrne and last season’s Pro14 top try-scorer Barry Daly are all knocking on their respective doors for first pick places.

It is a Leinster side that on a big European Cup day could have an almost entirely different line-up. Still, this is a strong side that offers a glimpse of the present and the future. The backrow with captain Rhys Ruddock at openside flanker has Ross Murphy on the other side and Caelan Doris at number eight.

Scott Fardy, tonight in the secondrow, was one of Leinster’s outstanding players last season. And Leinster have impact from the bench, too, in Jamison Gibson-Park, prop Andrew Porter and Fergus McFadden.

Cardiff will see it as a game they could take. Their home advantage because of the pitch is significant and they see themselves not quite as equals but fellow travellers along a gloriously successful European path.

Last year they spluttered off to a slow start but ended well, winning 11 of their last 13 matches, just falling short of the play-offs.

“You have to be top three to make the play-offs and we want to play finals rugby in this competition so we need to start well,” said Cardiff head coach John Mulvihill.

“I could give you our three-year plan or our five-year plan, but we also have a one-week plan and if we keep looking at it that way round then we will get to where we want to be.”

Last year the teams did not meet in Cardiff, but the previous season Leinster came back from 13-3 down at half-time to win 13-16 thanks to a try from Ruddock and 11 points from Sexton’s boot.

First game up. Already a lot hanging on the players.