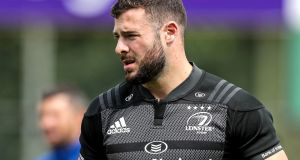 Robbie Henshaw: “We know every opposition this year will be better, so we ourselves need to be a better team.” Photograph: Laszlo Geczo/Inpho

The rigour of preseason is best tackled with a healthy body and mind, something to which Robbie Henshaw would subscribe. By his admission for the first time in three seasons there has been no injury legacy carried over from the previous campaign.

Hamstring, shoulder and knee issues took a hefty chunk out of his playing time last season, denying him the opportunity to play some key matches for Leinster and Ireland. His contribution was nevertheless sizeable and his recuperative power impressive, particularly in getting back on the pitch 10 weeks after dislocating his shoulder against Italy in the Six Nations.

The 25-year-old will have to temper his enthusiasm to get going in a match environment for another couple of weeks. The first matter in hand when the Irish contingent returned to preseason was a review of last season to identify areas in which Leinster could improve as they set about defending their Champions Cup and Pro14 titles.

Henshaw explained: “We sat down as a group and went through the tries we conceded last year and areas we can improve on, opportunities we missed where we could score tries or have done better. It’s definitely all about repeating what we did [in terms of trophies], but we know every opposition this year will be better, so we ourselves need to be a better team.

One of those hoping to facilitate that improvement is former outhalf and new backs’ coach Felipe Contepomi; the Argentine has already made quite an impression particularly for those who never got to play with him in a previous incarnation at the club.

“He’s a great addition, a new voice in the management [with] some new, great ideas,” Henshaw said. I spoke to Johnny [Sexton] and a few players who played with him and they said his knowledge as a 10 and 12 was brilliant; he was brilliant to play with.

“I’ll be working closely with him, getting some ideas on how to develop my game, and how I can get better as a player. He [Contepomi] is all about doing the basics well, nothing too fancy [but] being able to execute when we attack and doing it well.”

Henshaw referred to a quote from Stuart Lancaster in which he equated last season’s achievements to scaling Mt Everest, coming back down and preparing for an ascent once again. That’s the magnitude of the task.

Recruitment is an integral part of evolving and the Ireland and Leinster centre says former Wallaby international Joe Tomane has been an instant hit with the group.

“He’s a great player, [offers] great go forward ball and [is] a great ball carrier as well as being able to pass and distribute. He’s going to be a really important cog in our wheel this year and it’s great to have him on board. Having played against him with Montpellier, we always found him a tough opponent.

“He’s been around a while, got great game knowledge and the fact he can cover the wing, 12 and 13, is a great asset. He’s been brilliant in the environment as well, a new voice, and energetic in the changing room. He’s a good bit of craic, everyone likes that part of it. The lads are all enjoying him.”

Ireland will play 13 Test matches – four in November, five in the Six Nations and four warm-up matches next summer – in the build-up to the Rugby World Cup in Japan next autumn. For players who are in the final throes of pre-season, it appears a long way off, especially given the capricious nature of sport.

Joe Schmidt presided over a recent Irish training camp to which about 50 players were invited. It incorporated a brief review of last season’s Six Nations and the 2-1 Test series win over Australia. It also provided an orientation process in looking ahead to November.

Henshaw’s immediate focus is to blow away the cobwebs of preseason in a match or three and only then allow a brief glance towards the summit and the route he must retrace.

1 Owens’s comments increase tensions ahead of FAI senior council meeting
2 Paul Stirling’s heart over head decision to play on for Ireland bears fruit
3 Harding Park, named after a lousy US president who never stepped foot on it
4 Leo Cullen says rotation will be key as Leinster look to keep on winning
5 Anthony Martial makes sure Lask don’t have the last laugh
Real news has value SUBSCRIBE

Sporting Cathedrals: Le Stadium - European fortress of the mighty Toulouse 06:00
Joanne O’Riordan: Why doesn’t streaming bonanza extend to women’s sport? 06:00
GAA playing the long game as they await loosening of spectator restrictions 06:00
Paul Stirling’s heart over head decision to play on for Ireland bears fruit 06:00
America at Large: When not taking one for the team is the wisest course of action 06:00
Here is your handy guide to sport on television this week