Stuart McCloskey among Ulster team to take on Benetton 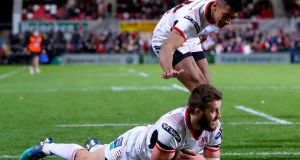 Ulster’s Stuart McCloskey has left the Ireland squad to play for the province in their Pro12 meeting with Bennetton. Photo: Tommy Dickson/Inpho

The fact that the Italian team to face Ireland in Chicago isn’t a frontline selection means that a young Ulster team faces several seasoned internationals in this Guinness Pro14 clash in Treviso.

Ireland squad members, Stuart McCloskey and Rob Herring start for an Ulster side that also contains former Ireland Under-20 international, Jack Hume, who is making his first senior appearance for the province. Ireland Sevens international Robert Baloucoune gets his second cap after an impressive debut last week while Billy Burns returns at outhalf.

There is a slightly more seasoned look to the pack containing Ireland internationals, Herring, Marty Moore, Kieran Treadwell and Sean Reidy, alongside Springbok Marcell Coetzee. Number eight Nick Timoney has been one of the province’s standout performers this season.

Benetton will be smarting after last week’s 31-3 defeat to Leinster and with a stronger team available will be keen to return to winning ways. The pitch at the Stadio Monigo is traditionally very heavy and soft underfoot, making it challenging to play a high tempo, expansive game; something that Ulster would prefer rather than becoming embroiled in earthier duel up front.

Ulster will need to be unyielding and precise in the set piece to try and get Coetzee, McCloskey and Henry Speight to provide them with positive gain-lines but the suspicion is that might just have too much strength in depth.