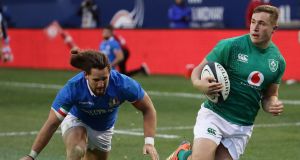 Ireland’s Jordan Larmour gets past Italy’s Michele Campagnaro to run in his third try during the match at Soldier Field. Photograph: Jonathan Daniel/Getty Images

Joe Schmidt admitted that much of the first-half of Ireland’s 54-7 win over Italy was “stodgy” but this game was lifted out of its ordinariness by the rather extraordinary footwork and pace of Jordan Larmour, who scored a second-half hat-trick.

Hitherto tryless in six appearances off the bench, Larmour marked his first test start by also setting up Luke McGrath for his try in the first-half, and rather brilliantly too.

With Rob Kearney a doubt for the Argentina game with the shoulder injury he suffered in Leinster’s win in Treviso last week, Larmour also provided timely evidence of the attacking dimension he can give this team.

“He certainly did today,” admitted Schmidt. “I thought Jacob (Stockdale) started really strongly as well and looked dangerous. Andrew Conway probably didn’t get as many chances but Jordan managed to get on the ball a number of times.”

Schmidt also highlighted “the way he (Larmour) set up Luke McGrath for his try in the first half. I think John Cooney was looking for one right at the end, he chased him all the way but he didn’t require him.

“I do think it was a pretty spectacular effort from Jordan and he’ll be delighted with that. The first ball he took in the air was good as well. There are a few positional things that he’s still working on and we wanted to spread his time across 15 and the wing. We know he can slot in at 13 as well.”

The Irish head coach also said that other players put their hands up, and on another day Tadhg Beirne would have stolen the headlines with two tries on his first test start.

“I thought there were a number of guys who really worked hard. Rhys (Ruddock) was one of them. I thought Quinn Roux did really well, very physical and his ball presentation was good in the lead-up to that first try after half time.

“Tadhg Beirne was good and everyone had quite good moments but I just don’t think we were cohesive enough or played at a tempo enough in the first half. Therefore, when it became stodgy no one really went anywhere too quickly.

“It was great to get a bit more speed into the game. Even with Bundee (Aki) and Garry (Ringrose) in the second half, in the lead-up to Garry’s try with Bundee getting on the outside, getting a sever point and linking with Garry was pretty effective.

“They were starting to get their partnership back underway because it finished really strongly in the Six Nations. Across the board, there are a number of guys.

“I thought Luke McGrath had a really good second half because with the platform in the first half, it was just a little bit slow and when he got that little bit of quicker ball, he gave us that tempo. Joey, and Ross when he came on did well to slot in.”

As for the overall performance, Schmidt said: “I was happy with the way we started on the back of a pretty freakish carry from Jacob and it probably reflected the way we finished as well, with the wingers coming out in pretty impressive fashion. On the back of that, I thought we built our way into the game really well. Garry just missed that try which was frustrating at that stage.

“Then the game became very stodgy. I thought it was stop-start and there was no real tempo in the game and it didn’t suit us overly well. They had some long periods of possession and I thought we did well to defend our line, they almost reached out and scored.

Every time he gets the ball, he’s looking for opportunities.

“It was disappointing to give up that try with Campagnaro making the intercept just before half-time. At half time, we probably committed to raising the tempo a little bit, getting a little bit more speed into the game and I thought we scored a couple of really good tries on the back of that. Then there were also a couple of individual efforts that were quite spectacular.”

Asked about Larmour, Irish captain Rhys Ruddock said: “It’s unbelievably exciting. Every time he gets the ball, he’s looking for opportunities. It’s just hard to keep up with him at times as a back row, we need to be on his shoulder to support him, but luckily today he didn’t need too much help when he got those opportunities. He’s a quality player and it’s good to have him in your team.”

There was an irony in Larmour’s exploits in that the Italian coach Conor O’Shea is a former Irish fullback. Asked about Larmour, he said: “I’ll leave Joe do the talking about him. He can run. We know he can run. We all know that. He does remind you of a young Christian Cullen in what he can do, and I’m sure there’s areas of his game that he knows he needs to work on as well but if you give someone space, and you give someone time, with his ability, it’s going to cost you. And it did.”

As for the game itself, O’Shea was particularly rueful when reflecting on the concession of two turnover tries within the first five minutes of the second-half which effectively scuppered his team’s hopes.

“I think both teams were looking at the depth. But I’m hoping a lot of younger guys will understand a little bit more about what it takes to get to the very highest level.

“It’s just unbelievably frustrating. In the first-half, despite our bad start, we work unbelievably hard to come back into a game and you literally just go out, and get a double barrel shotgun, and stick it on your foot and blow it off, because that’s what we did, and the game is done. That’s the bit that’s frustrating.

“If we had actually controlled what we can control at the start of the second half, there’s a different mentality. I’m not saying winning the game, I’m saying a different mentality and how competitive that becomes, because you drain everything out of yourself and you give to the opposition. We keep on talking and we’ll keep on working until we get it because we’ve got players who can play.”

“At the end of the game, I’ve been there before, you can look pretty disjointed at the end of the game but you have to pick through it, see some of the stuff we did well and understand it’s what we controlled. And as long as young players learn that we’ll keep on working and get there.”

Galgorm Castle resort could rescue 2020 Irish Open 11:25
Iain Henderson out for up to 10 weeks after hip surgery 10:26
Leeds sign teenager Charlie Allen from Linfield 10:08
Celtic launch investigation into player’s secret trip to Spain 09:29
Relieved Solskjær says he’s prepared for either Sevilla or Wolves 07:50
Crossword Get access to over 6,000 interactive crosswords