Ryan expects motivated Leinster to step up to the challenge

After the shock defeat to Connacht, holders fully focused for the visit of rivals Ulster 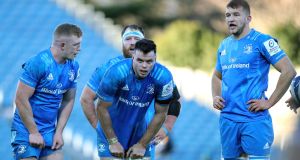 Leinster’s James Ryan (centre) with Dan Leavy and Ross Molony. “We’re treating this very much like a cup final. Ulster will be doing the same.” Photograph: Bryan Keane/Inpho

There were a number of words and analogies to which James Ryan returned consistently during the course of his media duties, ones which frame Leinster’s collective mindset as they approach tomorrow night’s Guinness Pro14 game against Ulster at the RDS (7.35).

Ryan spoke about ‘cup finals’ when describing the assignments Leinster face in the next three weeks, against Ulster and then a brace of Heineken Champions Cup pool games against the Northampton Saints and Montpellier.

Anything other than a victory at the RDS will leave Ulster in the box seat when it comes to topping Conference A, taking Leinster’s defence of the title outside of their direct control, even with their couple of matches in hand.

“We’re treating this very much like a cup final. Ulster will be doing the same. They’re probably out of Europe now, but they’re unbeaten in the league. The win down in the Sportsground was big for them. I think they’ll have a lot of belief coming here,” said Ryan.

“So there’s a bit of an edge to our preparation this week, probably a bit of a fear factor as well, which is often needed. We realise that if we don’t perform then we won’t get the result we’re looking for. It’s a bit surreal, almost like having cup finals at this time of the year.

“Obviously we were disappointed with the result last weekend but the nature of this week is it’s such a quick turnaround, we have to move on pretty quickly.”

The review following last weekend’s defeat to Connacht at the RDS was painful for those involved. The major concern from a Leinster perspective was a failure to match the physical intent and aggression the visitors demonstrated from the opening whistle, characteristics that underpinned a deserved victory.

Players accepted responsibility, coaches stressed the importance of being mentally and physically attuned to avoid a repeat in terms of the outcome. Ryan said: “It’s easy for me watching from the couch but we spoke [about the fact] that they [Connacht] had a lot more intent than us, physically like you said.

“It’s a reminder that we can’t get complacent. I think these interprovincial games are a step up sometimes from some of the other league games, there’s that extra bit of bite to them.

“There’s a number of guys from Connacht who would have come through the Leinster system and you could see how much it meant to them, guys like Tom Daly, Conor Oliver, these boys were up for it. It will be a similar intensity for us this week so we have to make sure we’re at that level.”

Ryan went on to emphasise the positive manner in which the squad had responded to setbacks in the past. Losing an unbeaten 26-match record in the league is one thing but he argued that to do so on home soil against another Irish province makes the disappointment more acute.

“It doesn’t happen very often, we’re going to lose games but it’s how we respond at this stage. When we’ve lost in the past we’ve responded very well. I know when we lost to Connacht before, 47-10 I think it was at the Sportsground (2018), we won the European Cup the following week.

“The opportunity for us to hopefully put things right is great for us. That’s been the chat, about that response. I’ve talked a lot about it now, so hopefully we get it right.”

The legacy from the Connacht game also produced physical pain. Johnny Sexton (HIA) and Scott Penny (HIA) are following the graduated return to play protocols to determine their availability. Jimmy O’Brien (shoulder) and Rory O’Loughlin (shoulder) both picked up knocks while Ciaran Frawley (calf) and Josh Murphy (hamstring) had to withdraw in the build-up to the game.

The prognosis on a potential return for Jordan Larmour, out since October, was positive at the start of the week, Ed Byrne and Jack Conan came through their second-half cameos, while Rhys Ruddock (ribs) is available. Some of Leinster’s Ireland squad members will be back to bolster the ranks.

Ulster too have suffered a litany of injury to backs with Jacob Stockdale’s knee issue sustained in the latter stages of the win over Munster rendering him a doubt for the game. Head coach Dan McFarland will also have some additional firepower personnel-wise at his disposal as the province seek to maintain their impressive unbeaten league run.

Ryan knows what to expect.

“They’re a really good, top-quality team. If you look at all the areas of their game it’s hard to pinpoint any weaknesses.”

But arguably the most important lesson from Leinster’s defeat to Connacht is that attitude and application are every bit as important as talent in winning matches.

Ulster’s new breed of backline boys can return silverware to Belfast 06:00
Gordon Elliott has ‘no complaints’ following one-year ban 09:13
Jockey Hugh Morgan and Young Dev return to Navan after wonder ride 06:00
Ian O’Riordan: You can’t put in what God left out (and other coaching secrets) 06:00
Ulster’s Pro14 season reaches familiar point of no return 06:00
Here is your handy guide to sport on television this week