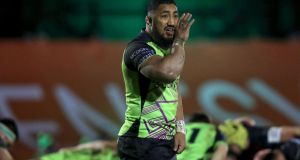 Connacht will continue to monitor Bundee Aki’s knee injury which sidelined their Irish centre for the festive derbies against Ulster and Leinster prior to their Conference B summit meeting against Munster at the Sportsground this Saturday (7.35pm).

An unspecified number of unidentified players also tested positive for Covid-19 in the week prior to last Saturday’s momentous win away to Leinster and were ruled out along with a number of close contacts who were self-isolating in accordance with public health guidelines.

Kieran Marmion was also ruled out in the warm-up at the RDS and with Paul Boyle, Dave Heffernan and Finlay Bealham others who could return, Connacht head coach Andy Friend expects to have at least a couple of players back in contention to face Munster.

“It’s to be determined yet,” Friend said of Aki’s possible involvement. “Bundee has got a knee injury at the minute which we’re working through. We’ve got a few other blokes who, as is the case at the moment, it’s day by day where you’re checking on their availability. Hopefully we’ll get a couple more back but we’ll wait and see.”

Friend admitted that the 80 minutes performance in last Saturday’s 35-24 win over Leinster was “right up there” as possibly the best performance during his time with Connacht.

“I’d love that Leinster game to be the bar for us but I’ve also been around this game long enough to say we won’t hold that every week. The question is ‘why won’t you?’ and the answer is because we’re human.

“I’d love for that to be our new bar and, in fact, I’d love for us to go beyond that. Quinn Roux’s message, and he’s right, was that it actually means bugger all this week if we come out and we don’t have that same energy and get turned over easily by what will be a very strong Munster side.

“One of the things we talk about is that if we’re a team that should be 20 points better than the opposition, well then let’s beat them by 20 points or more. If they’re a team where it should be a genuine arm wrestle, may the best team win, then let’s be that team. I reckon that this weekend, that’s going to be the contest between two very good sides. May the best team win.”