Leinster’s clash with Northampton under threat due to Covid outbreak

Saints have seen their Premiership match against Leicester Tigers postponed 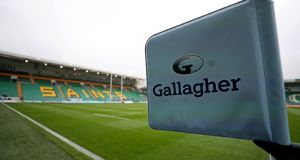 Northampton’s Gallagher Premiership match against Leicester on Saturday has been called off after the Saints returned positives in the latest round of coronavirus testing, Premiership Rugby has announced. Photo: Bradley Collyer/PA Wire

Leinster’s Champions Cup tie against the Northampton Saints on Friday January 15th is under threat of cancellation due to an outbreak of Covid-19 in the English club’s squad.

Northampton’s east midlands derby, set for this Saturday against the Leicester Tigers, has been abandoned.

“We are incredibly disappointed and frustrated that we are unable to proceed with such an important fixture for the club,” said Northampton director of rugby Chris Boyd. “It’s also a big blow to have back-to-back matches cancelled, as we had hoped to pick up some momentum again following an important win on Boxing Day.”

“The club has been absolutely rigorous in how we have followed the protocols laid out for us, and despite returning a number of positive tests this week, we were confident that we have more than enough of our squad still healthy and available to play the game if required,” Boyd continued. “However, we are following the advice we have been given, which was not to play the game and to close our training facility until next week.”

The Saints squad and staff will be re-tested on Monday with the EPCR’s new protocols forcing them to undergo a second round of testing on Wednesday, in order to salvage the Leinster fixture.

If the trip to Franklin’s Gardens is called off, Leo Cullen’s team will most likely be awarded a 28-0, bonus point victory.