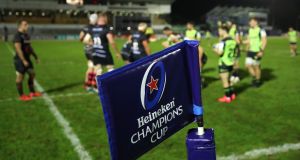 The drastic scenario of French clubs boycotting this season’s Champions Cup has been avoided by an agreement to test players and staff no later than 72 hours before kick-off of all European matches.

The issue arose due to British clubs and Irish provinces testing players for Covid-19 earlier in the week, for obvious reasons around preparation, but this system is to change before next week’s third round of games.

In response to Bayonne stating they would pull out of the Challenge Cup, citing a number of Covid-19 positives that occurred in their squad after playing Leicester last month, tournament organisers EPCR confirmed that “no club participating in the Heineken Champions Cup or Challenge Cup has officially informed EPCR of any intention not to fulfil their remaining fixtures in the 2020/21 season”.

However, the EPCR medical advisory group, assisted by independent advice from Swiss based virologist Dr Daniel Koch, met last Monday to discuss “testing schedules, contact tracing and case management, match day risk assessment, cross-border travel and protocol compliance”. This gathering appears to have allayed concerns from the French clubs that have been working throughout the pandemic under a 72-hour testing system.

France currently requires a negative test, inside a 72-hour period, from all people entering the country.

The new protocols could lead to an increased number of cancellations as the events leading up to Leinster versus Munster being postponed on St Stephen’s Day showed there is an increased possibility for more games being called off as there won’t be sufficient time to re-test and rule out false positives.

Leinster, generally, test players on Tuesday with results returned on Wednesday. Any positive samples are re-tested to rule out false positives with a third test required to confirm a negative.

These protocols will be switched to Wednesday for Friday and Saturday Champions Cup fixtures and Thursday for Sunday games. The English Premiership clubs test players on Monday but another round of testing will now be required midweek before European competition.