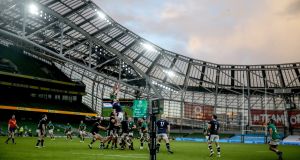 Ireland have played all matches behind closed doors since the Six Nations was postponed in March. Photo: Dan Sheridan/Inpho

Despite the prospect of a vaccination programme during 2021, the IRFU and the four Irish provinces enter the new year operating on the premise that it will be next autumn at the earliest before crowds, adhering to one-metre social distancing, are re-admitted to rugby grounds.

Furthermore, by extension, they do not anticipate capacity attendances at Irish rugby matches until 2022. All of this is on the basis that the vaccine rollout will not reach the majority of supporters until the third quarter of the year.

The most immediate and severe impact will be the financial losses incurred by an empty Aviva Stadium for Ireland’s home games in the 2021 Six Nations against France and England. The likelihood is that the IRFU will incur a further shortfall in excess of €10 million through gate receipts and hospitality alone, with additional losses due to there being no food or beverage sales.

In the absence of paying spectators across the other 13 fixtures in the tournament, the six unions and federations will probably suffer combined losses in excess of €100 million.

Hence, it is quite possible that the six will continue to explore the viability of moving the 2021 Six Nations back to a summer slot in July and August in the event of the eight-match British and Irish Lions tour, scheduled to take place from July 3rd to August 7th, being postponed.

On Saturday the Lions managing director Ben Calveley issued a statement saying the Lions board will continue its regular meetings and discussions through January and into February before deciding on whether this year’s tour will go ahead.

There appears to be little likelihood of the Lions tour going ahead as scheduled given the forlorn news emanating from South Africa with regard to the worsening rise of the Covid-19 pandemic in that country and its delayed vaccination programme.

The possibility of an estimated 35,000 travelling fans making the trek there next July, critical to the financial success of Lions tours, looks decidedly unlikely. Alternative measures, such as the Springboks coming to the UK and Ireland, or the Lions touring France, are even more remote.

Besides which, there is no guarantee of crowds being admitted to rugby stadia in Europe by July or August either and so, in all probability, the most viable solution for all concerned parties will be to postpone this year’s planned Lions tour to the same dates in 2022.

What’s more, the Six Nations is due to start on February 6th, in less than five weeks, affording little time to reschedule the tournament in entirety for the summer, with all the logistical difficulties included therein.

Besides which, the TV companies and sponsors are probably quite content with the traditional February/March slot which the Six Nations has historically enjoyed at a time in the calendar when there is less competition from international sport.

Furthermore, there’s scant evidence as things stand to suggest that a five-month delay would necessarily result in vast swathes of supporters being re-admitted to rugby stadia in Ireland, England, Wales, Scotland, France and Italy.

Certainly it would appear that the IRFU and the provinces don’t expect this to be the case.