‘Everyone has to do the right thing’: Leo Cullen on challenge of Covid-19

Leinster coach confident that Connacht game will go ahead on Saturday 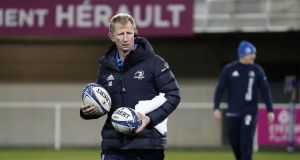 Leinster coach Leo Cullen is preparing his side for an interprovincial clash with Connacht at the RDS on Saturday. Photograph: Dave Winter/Inpho

For Leinster the last seven days have underlined the volatile nature of the coronavirus pandemic, even in the scrupulously sanitised and regimented bubble environment in professional sport.

The postponement of last Saturday’s Guinness Pro 14 game against Munster in Thomond Park came on foot of some ‘false’ positive tests that ultimately proved to be negative when players were retested. The match might have gone ahead but best practice dictated that the game be refixed.

A date is as yet undetermined by the tournament organisers but there are a number of free weekends between now and the end of the 2021 Six Nations Championship, the first of which is towards the end of January after the conclusion of the pool stages of the Heineken Champions Cup. A postponed tussle with the Scarlets must also be squeezed into Leinster’s fixture schedule.

Over the weekend a senior Leinster player felt unwell and tested positive for Covid-19. On Monday when 104 players and staff underwent PCR evaluation another senior player returned a positive test. They are both self-isolating as are any close contacts of those affected while the HSE has been informed.

Leinster head coach Leo Cullen confirmed that Saturday’s Pro 14 game against Connacht at the RDS will go ahead while providing a little background detail to the postponement of the Munster game. “Yes [the Connacht game is going ahead]. We’d 104 people tested [on Monday]. We haven’t been in since the start of last week.

“There was uncertainty around some of those tests [carried out on the Tuesday of the Munster match week] – probably the best way to describe it – they came back positive and then subsequently negative, but the decision was made to postpone the game. So this week, we’ve had one positive case this morning, the results came back the first thing this morning and that player is isolating now.

“We’d one player with symptoms in between, again that was one of the fears for us, because of when we tested and the little bit of uncertainty prevalent in society, people doing family bits over the Christmas period and the game on Stephen’s Day. The decision was made with the Pro14 and all the various medics that that was the right course of action to postpone.

“Everybody knew and accepted the fact that as things started to loosen up in society we were going to come under more risk and it’s pretty obvious as the country goes from 100 or 200 cases to over a thousand cases a day the risk increases dramatically. That’s just something that we have to deal with and that’s what we’re doing our best to deal with.”

There are other non-playing considerations at this time of year, one of which is the negotiation of contracts. Cullen admitted: “There are lots of things that aren’t ideal, that is just the situation we have to live with. It’s the reality; there is uncertainty for the future.

“There are lots of positive announcements. The Rainbow Cup and what that will lead into in the Pro 16 is hugely positive. The vaccine is a positive noise in terms of trying to get some supporters back to the grounds, get them in safely. That changes the revenue model for professional sport really. Then the picture becomes clearer.

“I am optimistic about the future but there is still uncertainty. We just have to work our way through it, play the hand that we have been dealt. Some guys deal with uncertainty better than others. That is the challenge.”

On the playing front Harry Byrne (back) isn’t available this weekend, James Lowe (knee/groin/hip) hasn’t rejoined the training group so is further away while others nursing bumps and bruises will be monitored during training this week.

The national player management programme and a fixture schedule that includes upcoming matches against Connacht, Ulster, Northampton Saints and Montpellier ensure that Cullen must husband his resources shrewdly. Cullen concluded: “Overall the group is good and competition is still high, even with all the variables in play.”