‘Winning away in Dublin, in and of itself, is something that you would aspire to’ 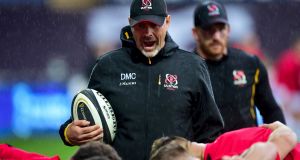 Ulster head coach Dan McFarland is looking forward to the challenge of taking on Leinster at the RDS on Friday night. Photograph: Alex James/Inpho

Dan McFarland silenced his inner psychologist to take a chunk out of a nuanced query about Leinster exiles on the Ormeau Road before spitting it onto the Ravenhill turf.

In doing so, the engaging Ulster coach stirred the pot, ever so slightly, ahead of Friday night’s vital Pro 14 meeting in Dublin.

The question is as good as the answer: “Leo Cullen [who is struggling to field tightheads and outhalves] mentioned the raft of former Leinster players plying their trade in other provinces, that would almost make you feel sorry for him, how much does that raise the intensity of this interprovincial derby?”

Now, this line of inquiry is well worn, but Gavin Thornbury’s manic aggression on to Tom Daly’s sneaky intercept try as Connacht secured victory at the RDS last weekend makes it as topical as ever.

“Do I feel sorry for Leo? Are you joking!” the Englishman laughed. “He is sat in amongst 10 or 12 of the wealthiest schools in the country, plying people from rich families through those schools and churning out bursaries to the best prospects.

“Do I feel sorry for him? That’s hilarious.

“I love it up here. Andy Friend loves it in Connacht, doing the hard yards. When guys like Nick Timoney and Dave Shanahan and Alan O’Connor or Jordi [Murphy], when they run out with a white jersey on they are Ulster men, plain and simple.”

The fact does remain that Timoney, Shanahan and O’Connor are returning home on Friday night to face an organisation that took a glance at their teenage pedigree before choosing not to offer them a bursary.

McFarland was equally quick to dampen any investigation into his selection plans. Jacob Stockdale may or may not feature after damaging his knee against Munster. Marcell Coetzee may or may not return to the backrow before his return home to South Africa.

The presence of this star duo would go a long way to smashing Leinster’s suddenly fragile defence of their title. An Ulster victory would turn the host’s 26-match unbeaten run into a two-game losing streak and in the process put McFarland’s charges firmly on course to winning Conference A. The probable reward would be qualification to the Pro 14 final at the expense of the champions.

“It is an opportunity for us,” said McFarland, now in year three as Ulster’s chieftain. “It wouldn’t even cross my mind about ruining anybody’s anything. I have a huge amount of respect for Leinster as a province and a club. What they have done over the last number of years is totally deserved.

“For us it is an opportunity. Winning away in Dublin, in and of itself, forget about anything to do with the league, is something that you would aspire to.

“In the post-match interviews you could see how much it meant to Connacht.”

If I said to you that a team that lost one out of 27 games are vulnerable – no, I don’t think so

What would McFarland take from Connacht’s collective heroics to help Ulster plunge Leinster into a mini-crisis? “Their urgency in the first 20 minutes of that game. I don’t think that is anything that’s brand new. If you don’t have that kind of physical intensity in terms of the speed of your play but also in terms of the collisions you are going to find it very difficult to live with them. And if you can’t live with them in the first 20 minutes you are in trouble.”

This much maligned competition is desperate for another dramatic result. The world will stay the same if Ulster beat Leinster in Ballsbridge but it would knock the Pro 14 off its mind-numbingly predictable path.

That McFarland’s team must do this without the injured Iain Henderson, Sean Reidy, Jack McGrath, Luke Marshall and others actually pales in comparison to Cullen’s mounting list of absentees. With that in mind, it is suggested that Leinster – after their first defeat to a team not called Saracens in two years – might be vulnerable.

“That is not how I see it, no. They have a lot of quality players. They lost a game of rugby. The biggest surprise is the [defeat]. If I said to you that a team that lost one out of 27 games are vulnerable – no, I don’t think so. This is a massive challenge for us and we recognise it as such.”

Munster overcome gutsy Connacht to reach Pro14 final 21:56
Glory game sweet solace for Gündogan as he copes with lockdown loneliness 21:30
Harry Maguire unlikely to be summoned to court for appeal in Greece this year 21:20
Gordon Elliott’s horses will be able to race at Cheltenham under new trainer 21:08
Keith Duggan: Bloodlust for Elliott revenge seems shrill and suspect 18:39
Here is your handy guide to sport on television this week