Gerry Thornley at the Sportsground 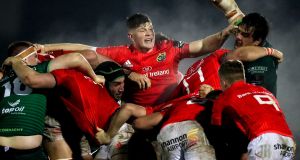 Munster’s Jack O’Donoghue in action against Connacht’s Quinn Roux during the Guinness Pro 14 game at the Sportsground in Galway. Photograph: Billy Stickland/Inpho

Munster will be top of the tree at Christmas after successfully quelling the fervour of the home team and the home crowd alike with an unspectacular but accurate and disciplined away performance.

For possibly the first time ever in this fixture Connacht had started with more internationals than a reshuffled Munster as they targeted this marquee festive derby. That sense of opportunity and undoubted desire may have contributed to an edgy, error-prone display by the home side as they fell to a sixth defeat in the last seven meetings with their southern rivals.

In what was by no means a classic, Connacht arguably played with more width and ambition, and they made more linebreaks (7-4) and beat more defenders (20-13) but also made more turnovers (13-9) and conceded more penalties (10-8).

All the while, with JJ Hanrahan assuredly at the wheel, Munster had much the better kicking game, and so dominated territory even more than possession, which was pivotal to this pillar-to-post win.

A sold-out Sportsground was expectantly in place well before kick-off as the mist added to the atmosphere on what was a perfect night for a rugby match.

A protracted set of scrums lead to indirect and full penalties for Connacht, and an all-in scrap between the two packs and even some of the backs.

The early collisions were also ferocious, and the thud when Dave Kilcoyne hit Quinn Roux, charging into contact at the start of his 100th game for the province, was so audible 20 metres infield that it drew a collective gasp from the Clan Terrance.

There were altogether angrier when Caolin Blade had to scamper back and retrieve a wickedly bouncing ball from John Porch’s loose pass, and was enveloped by what the home crowd felt was a high tackle by Gavin Coombes.

Their anger was compounded by Blade being penalised for not releasing as Hanrahan opened the scoring, although it was the Munster flanker who had to undergo a HIA soon after to be replaced by Jack O’Donoghue, and he did not return.

Connacht put plenty of oomph, width and tempo into their response, and when Billy Holland was pinged for not releasing Conor Fitzgerald drew the sides level. But, setting the tone for the first half Connacht did not deal well with the restart. Blade, lacking protection from his team-mates, had his kick charged down, forcing Tiernan O’Halloran to find a good touch which nevertheless gave Munster an attacking lineout 40 metres out. And when Bundee Aki was penalised for a high hit, Hanrahan had another tap over penalty.

The Munster pack too over with a sequence of close-in drives after a lineout maul, and O’Donoghue plunged over the line beside the posts.

Connacht needed a lift, and were given one by Dave Heffernan’s big hit on Kilcoyne, which forced a spillage and earned an attacking scrum. Aki charged onto Eoin McKeon’s flat pass and hands in the ruck enabled Fitzgerald to reduce Connacht’s deficit to 13-6.

In a recurring theme though, McKoen fumbled when trying to present the ball in the tackle, and the ensuing scrum penalty meant Hanrahan restored Munster’s 10-point lead.

A third brilliant take by O’Halloran was undone when CJ Stander latched onto a loose pass by Ultan Dillane as Connacht’s errors continued unabated.

A nice strike move off a lineout saw Hanrahan engineer a wraparound and Chris Farrell put Shane Daly through. The speedy fullback linked inside with Calvin Nash but Heffernan, of all people, had tracked the winger and his tackle forced a knock on.

With this, Connacht came alive. O’Halloran, relishing his return, brilliantly broke out and link with Aki for the centre to give Porch a run up the touchline, but his kick found touch.

Even so, a Connacht strike move off a lineout released Porch from Fitzgerald’s pass, and Aki bounced off one tackle for Kyle Godwin to have a run.

Frustratingly for Connacht, they were afforded an advantage of only one phase but at least Fitzgerald’s penalty with the last kick of the half made it 16-9 at the break. It also made for a better mood when the home crowd attempted to break a high viz world record during the interval, which they achieved.

Upon the restart though, Heffernan’s quick throw was compounded by Jean Kleyn’s break and O’Halloran being pinged for playing the ball off his feet, for Hanrahan to make it 19-9.

Munster’s line speed earned another turnover when a high pass left Heffernan an easy target for Liam Coombes, but for once Munster left Connacht off the hook when Kilcoyne couln’t hold on to Stephen Archer’s high offload.

Aki and Chris Cloete had an exchange after the latter appeared to take Aki out off the ball, and even the indestructible Stander needed treatment after a big shot by Dillane.

Connacht won a scrum penalty but their attempted maul was held by the Munster pack for a significant turnover. The visitors just weren’t letting the home team build any momentum.

Hanrahan’s punt again found space in behind and earned an attacking lineout but when Dan Goggin knocked on, Fitzgerald kicked downfield and Tom Daly followed up O’Halloran’s chase and tackle to earn the penalty in the jackal. However, the Connacht maul was pinged for obstruction and the frustrated home crowd fell silent again.

Connacht were running plenty of ball inside their own half and even when they inched into Munster territory Blade sniped and offloaded off the deck only for Tom Daly to knock on when tackled, early as the replays showed, by Farrell. Both sides went to their benches, especially Connacht, and Stephen Fitzgerald linked with Godwin on the counterattack for the latter to make a clean break and opt to chip ahead for Blade rather than pass directly to the scrumhalf, and Farrell covered the danger.

Much to the crowd’s fury, referee Andrew Brace deemed one of the chasing Connacht players went off his feet, and the home supporters’ mood wasn’t helped when the officials somehow missed a knock-on by Nash when Jack Carty found space in behind.

Entering the last 10 minutes and the last chance saloon for Connacht, Robin Copeland won a relieving penalty in the jackal and soon after offloaded for Blade to break way, only to be tackled around the neck by Hanrahan. It was the umpteenth appeal from the home crowd, but this time the penalty was awarded.

The Connacht pack mauled infield, finally gaining some traction and also creating a big blindside which Blade attacked. Carty, to his credit, backed himself by dummying to Porch and accelerating to score. Alas for him and home team, he could not add the difficult conversion.

Munster ran down the clock, but surprisingly went wide, where Aki could win the penalty against Liam Coombes for not releasing but one more final turnover did indeed allow Munster to fittingly keep Connacht at arm’s length in the game’s final play.