Connacht bolstered by return of Tiernan O’Halloran for Munster encounter 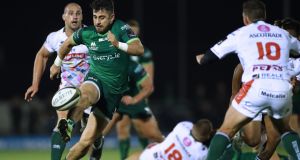 Connacht’s Tiernan O’Halloran in action for Benetton in October. The player returns from injury to face Munster at the Sportsground. Photograph: James Crombie/Inpho

The obvious impact of the national player management programme notwithstanding there should still be plenty to savour in a Guinness Pro14 clash that pits Conference B leaders, Munster, against their closest pursuers in the table, Connacht.

The home side welcome back Tiernan O’Halloran for the first time in a couple of months following a leg injury, Tom Daly shifts to the role of outside centre alongside Bundee Aki in midfield, while Clare-born Conor Fitzgerald gets another chance to test his mettle in this high-profile provincial derby; his brother Stephen is on the bench.

Up front, Quinn Roux will captain the team in his 100th appearance in a ball-playing tight five in the pack that includes hooker Dave Heffernan, named in Ireland coach Andy Farrell’s 45-man training squad. Jack Carty is included among the replacements so too Robin Copeland, who has been excellent of late.

Munster coach Johann van Graan makes 10 changes to the side that lost out to Saracens but retains a backbone of experience and quality in the form of Chris Farrell, JJ Hanrahan, Jean Kleyn, Billy Holland and CJ Stander, who will lead the visitors. Dave Kilcoyne has recovered from injury, thereby ending a frustrating spell on the sidelines.

Cousins, Liam and Gavin Coombes get a chance to showcase their development, while last year’s Ireland Under-20 Grand Slam winning scrumhalf Craig Casey will make his first Pro14 start in his third cap. His tussle with the in-form Caolin Blade will be one of several interesting match-ups on the day.

Shane Daly’s versatility – he can play centre, wing and fullback – will be scrutinised in a testing environment while Dan Goggin will relish the midfield collisions. JJ Hanrahan will be hoping to enjoy a platform that allows him to express his football ability. The Munster bench contains a number of Academy players plus two of the brightest younger talents in the province in Jack O’Donoghue and Fineen Wycherley.

The set-piece and the breakdown will play a significant part in deciding the outcome and there are some personal duels in all three disciplines that will be worth watching. Kilcoyne and Finlay Bealham, once international team-mates, won’t want to offer an inch in the scrum, so too Denis Buckley and Stephen Archer on the other side, while Billy Holland’s lineout mastery must cope without the absent Peter O’Mahony.

It could be a very tight contest, highlighted by the fact the bookmakers make Connacht three-point favourites, a fair reflection on the likely nature of the game and arguably the potential outcome.