With minor tweaks to their game, the pair can be Ireland’s halfbacks for the Six Nations 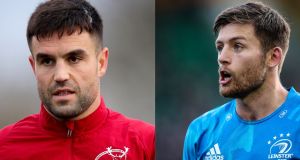 Conor Murray and Ross Byrne: ‘It’s important to also remember why you love to play rugby. Because it’s fun. I would like to see you both playing with the occasional smile on your faces.’ Photographs: Oisin Keniry and Billy Stickland/Inpho

I thought I would take the opportunity to drop you both a short note to wish you a merry Christmas. I hope you both enjoy the jumble of fiercely-fought matches that Christmas and January provides.

It will be a window for you both to again prove yourselves on several levels.

If you perform to the standard I know you are both capable of, you could find yourselves as the halves pairing for Ireland in the 2020 Six Nations.

Firstly, I want to talk to you about pressure. That is a word that will get pushed at you both over the next few weeks in your respective different situations.

Ross, it is obvious to me that you have worked exceptionally hard on all aspects of your game. Your tackling has improved markedly, you are an excellent goal kicker and probably the best kicker out of hand in Ireland.

Combined with your athleticism, this makes you capable of directing Leinster and Ireland around the field. You have also developed that essential skill in your running game of accepting the ball much flatter and attacking the defensive line.

In the past, being Johnny Sexton’s number two, has meant that you have had to “know your place,” and be the quiet gentleman, that former Leinster players assure me you are.

To quote from “The Goonies”– and I have been waiting years to do that – “Now is your time.”

You are the leader.

In rugby, body language does not talk, it screams. Currently your body language is telling me you are a lovely bloke, who is Johnny’s number two.

I want your body language to scream at me that whatever the price of victory, you will drive your team to pay it. The great outhalves like O’Gara, Sexton, Campbell, Ward, Lynagh, Carter, Ella, Wilkinson, Spencer, and Fox all carried powerful body language. It’s not arrogance, it’s belief.

The thing with body language is that even if you don’t have complete belief and you’re a bit nervous, you can pretend.

The Bible’s greatest lesson on sports psychology is, “Act as if you have faith and faith will be provided”. Act with self-belief and you will believe. The trick is to display body language that sends the message to your opponent, and more importantly to your team-mates, that you are the boss.

Every other aspect of your game is good enough for international rugby. That is a result of the countless hours of practice and strategising you have put in over many years. The ocean of work you have done and the time you have patiently spent working, far from witnesses, in the shadow of Johnny Sexton, has provided you with this opportunity.

There is no pressure on you, just this wonderful opportunity to get excited about, because you have earned it and your are good enough. I have seen that in you for years.

Conor, the world will be telling you that John Cooney is coming for your Irish jersey. John is playing exceptionally well and he will be seriously considered because of his immaculate goal kicking, the excellence of his passing and his growing self-belief.

Please forgive me speaking like this to one of Ireland’s greatest ever scrumhalves, but since your neck injury I have noticed a hesitation in your passing from rucks. It is as if you are questioning your decisions at every ruck.

It appears to me the cause of your delay is you are simply unsure of which way to pass. This is transforming Munster’s fast ruck ball into slow ruck ball. I know Munster are learning a new offensive system and it heavily relies on the scrumhalf choosing whether to pass to the open or blind side, but if you continue to hesitate at the ruck, Cooney may very well be selected.

I think you can simplify the process. Just get to the ruck as fast as possible and pass the ball as fast as possible. If JJ Hanrahan and the other Munster backs are not giving you early calls on which way to pass, do a “Sexton” and put a “rocket” up them. The first backline receiver must be telling you which way to pass, that is their job, then you must trust the call. If you don’t get a call then just trust your instincts as to which way to go, but do it fast.

Over the years I have seen many high-quality players hit patches of poor form. Almost every time they then start to overthink their situation. They try so hard, they force their game. The harder they try, the worse it gets.

This may also sound like a strange thing to say to such an experienced scrumhalf, but you need to take a moment to reflect on just how good you are. When I coach young scrumhalves, I simply get them to copy your passing and kicking techniques. You are that good you are the template.

Trust your rugby instincts because that is what brought you success. Like Ross, you are good enough.

It’s important to also remember why you love to play rugby. Because it’s fun.

I would like to see you both playing with the occasional smile on your faces.