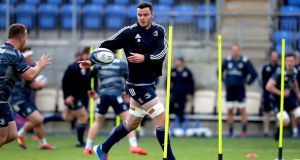 Northampton’s largely shadow side only points to one outcome. Any result deviating from a comfortable victory for Leinster would be a major surprise.

Chris Boyd’s squad was already shorn of leading lights in Courtney Lawes and Owen Franks when torn asunder last Saturday at Franklin’s Gardens. Leinster did pay a toll for the seven try performance with old and new guard – Johnny Sexton (knee ligaments) and Rónan Kelleher (fractured hand) – ruled out for the foreseeable future.

Sexton must revisit a knee specialist in the UK, making a return for the Six Nations by no means guaranteed.

“Yeah, he’s seeing somebody in the UK and he’ll go back there just to get an update in a couple of weeks,” Cullen explained, “but he’s working hard to try and get himself back as quickly as possible, but he won’t be a million miles away hopefully.

“Not exactly, no,” Cullen replied when asked if there was a time line which would include Sexton being fit to face Scotland on February 1st.

“You could see he twisted his knee, and like I said he’s seeing a specialist. He’s under control and on the mend now.

“You would love if he was back [for Leinster in January], but it’s probably more realistic for Ireland, I think, yeah.”

Regarding Sean Cronin’s neck injury, Culled added: “He’s back training fully but it’s probably too soon for him.”

So, opportunity knocks for Ross Byrne and James Tracy but Northampton enter a cauldron of multiple Christmas parties in corporate Aviva without their leading internationals as Boyd makes eight changes from the team that was out fought at home. Such selections are a sign of the times as English clubs – even the Premiership leaders – cannot cope with battles on two fronts.

The presence of Tom Wood and Dan Biggar should offer some level of resistance, but for how long?

The expected hammering would reflect how slick Leinster have been despite a predicated World Cup hangover. In fact, the unbeaten fight across two fronts has produced a seamless rotation of the talent at Cullen’s disposal.

“Everyone is a bit nervous playing in front of such a huge crowd, in terms of the global club landscape, so I know it means a lot to the players to put in a performance.”

Besides the enforced changes, Luke McGrath regains the nine jersey ahead of Jamison Gibson Park and Scott Fardy replaces Devin Toner to lead the team.

Interestingly, Rob Kearney remains on the bench, losing out as much to his younger brother Dave on the wing as we will see the continued progression of Jordan Larmour at fullback.

Listen for the 41,000 crowd tuning in if Leinster are closing in on the 26 point handicap. The size of the diamond may depend upon it.

Lewis Hamilton keeps the foot down in the desert to claim 98th career poll 15:43
Kilkenny defence keeps Cork in check to claim spot in camogie final 15:20
VAR dominates as late penalty denies Liverpool victory at Brighton 15:01
Georgia captain Sharikadze still rates Ireland among the world’s best 14:38
All Blacks go back to basics to beat Pumas and snap losing streak 14:00
Crossword Get access to over 6,000 interactive crosswords