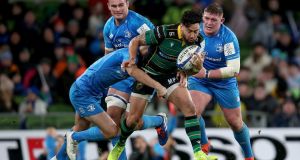 Matt Proctor in action against Leinster in the Heineken Champions Cup match at the Aviva stadium. Photograph: Bryan Keane/Inpho

All three Northampton players cited for dangerous tackles in last Saturday’s heavy defeat to Leinster at the Aviva stadium have had the complaints dismissed at a hearing in London on Wednesday.

Centres Matt Proctor and Andy Symons were cited for hits on Ciarán Frawley and James Tracy respectively, while Lewis Bean was cited by match commissioner Jeff Mark for a tackle on Cian Healy during the 21-50 defeat to Leo Cullen’s side.

The committee decided that while Proctor had committed an act of foul play, the tackle did not warrant a red card. It determined that the contact to Frawley’s head and neck area was indirect rather than direct, and therefore constituted an on-field mitigating factor under World Rugby’s high tackle decision-making framework.

The committee decided that the primary contact between Symons and Tracy had been shoulder-to-shoulder, and that there had been no contact with Tracy’s head or neck area. As the tackle was not an act of foul play and could not therefore have warranted a red card, the citing complaint was dismissed.

The committee decided that the clash of heads between Bean and Healy was accidental, and that there was no act of foul play that could have warranted a red card.

All three players are free to play, while the EPCR has the right to appeal the decisions.