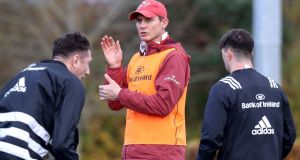 As much as the sheer scale of the epic comeback win in Clermont three weeks ago will have thrilled Munster supporters – there were odds of 50/1 on them winning when they fell 28-9 behind in the 24th minute – so too will have been the manner of the victory.

Munster did turn to their maul in the decisive push for the winning line – albeit with a couple of nice variations in their catch-and-drive – but as eye-catching were the launch plays and interlinking between backs and forwards which initially fuelled the fight back.

Stephen Larkham’s imprint was all over it.

From the Randwick/Australian school of cutting-edge attack play, with a premium on creating space, Larkham took the ball to the gain line and used is range of passing to pick out runners, rarely kicking the ball. He was the primary playmaker in Australia’s 1999 World Cup winning team and in the Brumbies side which became the first outside New Zealand to win the then Super 12 in 2001.

Unsurprisingly, he has taken the same philosophy into his coaching. It was always likely that his influence would be more pronounced this season without a World Cup to contend with and afforded a full pre-season. His effect is good for Munster and Irish rugby. Heck it’s good for rugby.

“There’s nothing that really stands out as being a marked improvement on last season but I’m very happy with the way that we’re incorporating both forwards and backs at the moment with our attack,” he admitted yesterday from Munster’s HPC base in between a double session as they cranked up preparations for Saturday’s crunch Conference B summit meeting with Connacht at the Sportsground (kick-off 7.35pm).

“Traditionally attack has been seen as a split between forwards and backs, and forwards really focus on the set piece. We’ve worked really hard on trying to upskill everyone on our team to be able to co-ordinate and combine when we get to the multiphase stuff, and even with our set-piece stuff.”

“I think if you look at our last couple of games there has been really good combination there and I’m very pleased with where the skill level is at. Most of the conditions over here are very wet, windy, sometimes cold, but our guys handled those conditions exceptionally well.”

“Everything has definitely improved but that’s certainly an area I’m pleased with at the moment.”

Among the launch plays used against Clermont, a standout example of Larkham’s influence was the try off a line out when Damien de Allende, pulling the ball back for Gavin Coombes to run over Camille Lopez, and CJ Stander, running a hard decoy line, were used to open doors for runners behind them before Mike Haley scored off Peter O’Mahony’s pass. Forwards interlinking with backs, it was very Australian, very Brumbies-like.

“That was a set-piece play, so we had a bit of time working on that one. Again, I think we had a really good combination throughout the whole game, not just in that play, between the forwards and the backs. That one was certainly one that we did work on through the week and we got a good result out of that, but I’m talking more about so much the set-piece, more the multiphase stuff, where there’s better communication and combination, identifying where the space is.”

Alas, a particular lament is club rugby’s shutdown, as well as A fixtures and with it both the short-term and longer term damage.

“We’ve got our own battle to get those A games, but this is going to hurt us in the long run, in terms of development of players. When we talk about our academy intake or potential players that could be signed for Munster, there’s a number of those players who just aren’t getting an opportunity to play and therefore not developing their game.”

On Saturday, Larkham will renew acquaintances with Andy Friend, who coached him at the Brumbies Under-21s and the Australian Institute of Sport in 1995, before the two were briefly reunited at the Brumbies in 2011 for Friend’s last year as head coach there.

“Andy brought me back from overseas to coach,” recalled Larkham after finishing his playing career in Japan. “I really enjoyed my time with Friendy. He sees the game really well, he’s got great empathy with players. He was very good for me as a young coach, nurtured me and guided me along the way. But it was quite short. His departure from the Brumbies was after only a couple of months. But I certainly got a lot of learnings out of him.”

He is thus highly wary of the challenge Connacht will present. “I’ve been impressed with Connacht’s attack this year so that’s certainly an area that we have to focus on, making sure our defence is right. They’ve scored a number of tries and created a number of breaks in the outside backs so it’s certainly something that we’re very conscious of.”

“Like every other team in the competition they’ve got a very good threat at the breakdown. Ulster caused us a bit of trouble there on the weekend. We couldn’t get the speed of ball that we would have liked and Connacht had the same sort of threat over the breakdown so they are the two things that we have to be conscious of.”