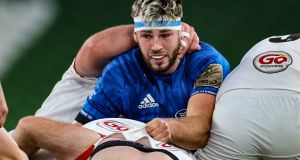 Leinster’s Caelan Doris is one of the biggest talents in Irish rugby. File photograph: Inpho

Position: Number eight
Age: 22
Height: 1.93m (6’4”)
Weight: 106kg (16st 7lbs)
Leinster appearances: 35 (5 tries)
Ireland caps: 7
Why’s he so important? The manner in which he plays the game identifies him as an exceptional talent. Players invariably do some things very well and others less so but Doris possesses all the qualities required to be a standout number eight in the Test arena. There is an obvious intelligence to the way he plays the game, his ability to identify or create space, to make good decisions on the ball, whether to carry or pass and then there’s his footwork in and through contact that takes his team over gainlines. He tackles with authority and also has the innate poaching skills of an openside.

Trivia: As part of his Psychology degree he undertook a research project on mental toughness and if it affected a player’s ability to perform as capably away as at home. He played senior cup rugby in school as a 15 year old and represented the Ireland Under-20s when he was 18, going on to captain the national age-grade team the following year. He shares a milestone with head coach Leo Cullen - they each made their respective Leinster debuts as players against Connacht in the Sportsground as 20-year-olds, albeit 20 years apart.

Why’s he so important? A brilliant rugby player whose performances have helped to elevate the standards of the players around him while at the same time contributing massively to some of Ulster’s finest performances. Two serious knee injuries wiped out the first couple of seasons with the province but since then his talent and work ethic have done so much to propel Ulster to the place where they are now. When he announced his decision at a squad meeting to return “home,” and that’s the operative word here, to try and make the Springboks team for the Lions series, the reaction of the players spoke eloquently of the regard in which he is held.

Trivia: He scored six tries for the Springboks the last of which was against Ireland at the Aviva stadium in November 2014, a game South Africa lost 29-15. Coetzee picked up three trophies, Supporters’ Player of the Year, Rugby Writers’ Player of the Year and Rugby Personality of the Year at the Ulster awards last September to honour his performances in the 2019-2020 season. He owns a guesthouse next to Kruger National Park and has studied Wildlife management.

1 Frustration for 14-man Ulster as Leinster machine rolls on