Centre owes a debt to Lansdowne and Mike Ruddock, after finding his feet out west 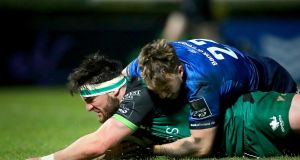 Connacht’s Tom Daly is perhaps the in-form centre in Ireland at the moment. Photograph: Inpho

Just over two years ago, by his own admission, Tom Daly’s career was “kinda lost”, whereupon a call from Andy Friend changed everything.

Having taken up the offer of a half-season on loan with Connacht as a medical joker, it wouldn’t be too much of stretch to say the 27-year-old former Lansdowne and Leinster player is currently the form centre in the country.

Last week’s match-clinching try against Leinster was fair reward for the line speed and aggression he brought to the gain line, but at 6’ 4” and 106kg, Daly brings more than just physicality, for he has footwork, is quick and a good distributor as well.

“It’s probably the first time in my career that I’ve had eight, nine games starting in a row, so I’m really starting to reap the rewards from that.

“Last year, I had a good year. I was kinda in and out of the team, we had a lot of competition with Kyle Godwin being here, Peter Robb was fit and playing really well, and obviously Bundee was around as well.

“This year, I’ve been lucky enough to get the opportunity and I think it’s standing to me in my performances. It’s probably the best rugby I’ve played in my career and I’m really enjoying it.”

Reflecting on that fateful call from Friend in December 2018 this week, Daly said: “It probably came at a point in my career where I was kinda lost nearly. It couldn’t have come at a better time. I can clearly remember getting the call from Friendy. I nearly took his arm off for the opportunity because there wasn’t much happening for me in Leinster.

“I was just back from a knee injury and I couldn’t really get my way back into the team, so I was looking around for contracts. There probably wasn’t that much coming up because I hadn’t been playing that often so it was quite a tough time, but Friendy gave me a call on a random Sunday, said they had a few injuries and would I be interested.

“I jumped at it. I was down the next Monday and a week or two later, I was playing against Munster. So it has worked out pretty well for me and this year, in particular, with the game time, it was really stood to me.

“It has been the dream move really,” he says, citing the culture created by Friend and living in Galway.

He also owes a debt to Lansdowne and Mike Ruddock, who brought him into the Irish Under-20s. All bar the recently retired Scott Deacy from that Lansdowne backline which beat Clontarf in the AIL final in 2015 went on to play professionally.

“I think when I was at Leinster 80 per cent of my rugby minutes came at Lansdowne. I just think AIL is such a good platform for young players to get minutes. I know it’s obviously hard for the academy lads this year, there is no AIL going on and they are disappointed with that. They are training away with no real games to come. I can’t speak highly enough of it, especially with Lansdowne.

“It was such a good club. They have a good link with Connacht, with Matt Healy, Shane Delahunt, Tom Farrell, there are loads of us down here from that team that won that AIL.”

Sam Bennett has to settle for fifth in second stage of Paris-Nice 16:28
Ireland to play Qatar in Hungary on March 30th 13:46
Jacob Stockdale back in Ireland squad ahead of Scotland clash 10:50
Solskjær says Man United ‘suffered’ to end City’s streak 10:06
All in the Game: Paul McGrath is a God in Ghana 10:00
Here is your handy guide to sport on television this week