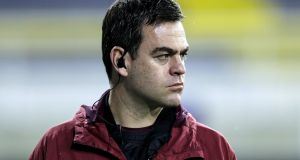 Munster head coach Johann van Graan: ‘I think we’ll enjoy the win first of all and then reflect on it. It’s a big win for the club.’ Photograph: Laszlo Geczo/Inpho

As their forwards coach, no doubt much to the satisfaction of Muldoon, Connacht’s most-capped player of all time, Bristol’s maul inflicted much of the damage. Maintaining a theme of Irish fightbacks over weekend, Connacht twice threatened to overhaul big deficits, but inaccuracies at the set-piece and breakdown undid them.

They might have taken a bonus point by kicking a penalty rather than chasing a third try in overtime, but like Ulster are realistically chasing a top-eight finish in Pool B and qualification for the Challenge Cup.

The story of the weekend, undoubtedly, was Munster’s astonishing 39-31 comeback win in at the Stade Marcel-Michelin on Saturday night. Already 9/1 underdogs before the game to inflict only a second home defeat on Clermont in 33 pool games, to put their victory from 28-9 down in the 25th minute into some kind of perspective, at that juncture Paddy Powers were offering odds of 50/1 on them winning.

To outscore Clermont by 30-3 from that point onwards must rank as one of the greatest Munster victories in the competition’s history, even by their fabled standards.

As Johann van Graan noted afterwards, Munster hadn’t won on French soil since beating Racing in Colombes in January 2017 four seasons ago, with four winless treks to France in the interim.

“I think we’ll enjoy the win first of all and then reflect on it. It’s a big win for the club. We haven’t won in France for three years and I think if I’m not mistaken Clermont have won 31 of their last 32 pool games here.

“This whole city is just about rugby. It’s a team that Munster respect a lot and that I personally respect a lot and you’ve just got to feel what this club is about and even when we came in on the bus they had some of their supporters and they were so respectful towards us.

“So for us as a team, as a club, as a coaching group, [it is] obviously a massive win and specifically in the way that we did it. Look, we’ll enjoy tonight, we’ll travel back and we start again on Monday.”

At 28-9 down, although the scoreline didn’t accurately reflect how competitive they’d been at that stage, realistically Munster were staring into the abyss.

Critically, they kept the scoreboard ticking through JJ Hanrahan, whose ninth kick out of nine put the game out of Clermont’s reach.

“It was a big pressure kick and he’s missed some over the last year,” said van Graan, “but the good thing about JJ is he kept going and he wanted those kicks and he converted that one tonight – really happy for him”.

As it is, Racing’s extravagant bonus-point win away to Harlequins by 49-7 yesterday (with Simon Zebo one of their seven try scorers) means Munster trail the French trio of Lyon, Racing and Toulouse by two points, with Clermont just two points behind.

Defending champions Exeter, Gloucester and Bristol are still in the mix too, but Ulster probably have too much ground to make up after recovering from a 24-10 deficit to lead 34-24, only to lose 38-34 by dint of Gloucester’s 85th-minute try at Kingsholm on Saturday.

In an uber competitive Pool B which has been distorted by four cancelled games resulting in EPCR declaring a quartet of bonus point, 28-0 wins.

Van Graan kept this in perspective when saying: “Firstly it’s a worldwide pandemic so you respect those scores and the health and safety of people comes first. We respect the competition rules and we can’t control that. The only thing we can control is what we do. We said we need to come through this game and eventually we need to win all four pool games to go through to the quarter-final.”

With that in mind, the return meeting between Munster and Clermont at an empty Thomond Park on Saturday, January 16th is a win-or-bust game for both sides.

As things stand, Leinster and Munster would meet in a two-legged quarter-final, although for sure there are a few more twists and turns left yet.